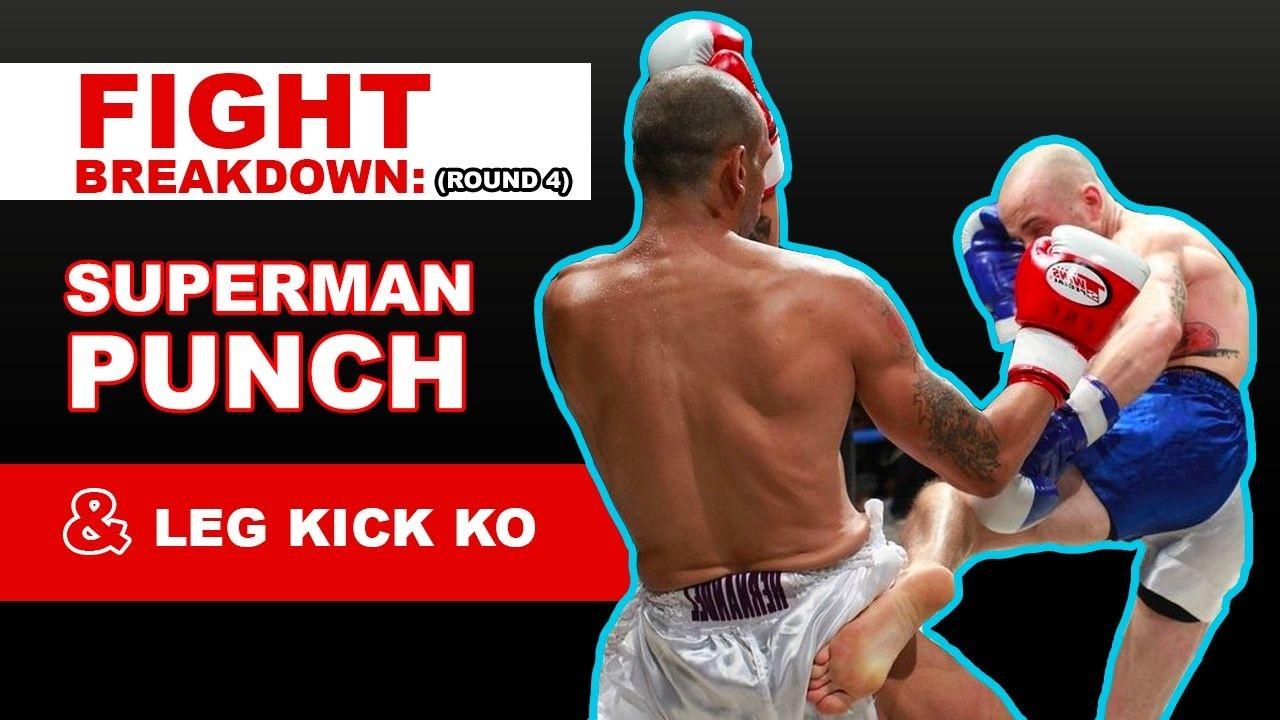 AN UNCOMMON END TO A FOUR-ROUND SHORT-NOTICE FIGHT!

Fresh from the end of round 3, our biggest take away from this fight so far is… leg kicks.

One leg kick is rarely ever going to be enough to end a fight. However, leg kicks do pay great dividends as the fight goes on! And if enough leg kicks are banked, your opponent is going down.

But let’s say you’re somehow still not a believer in the leg kick. Well, if you kick your opponent hard enough, they’ll believe in them enough for the two of you! That is what matters.

Today we’re talking about how leg kicks and punches work together. But before that, here’s the rest of the fight:

In the opening combination, Sean immediately starts blasting his opponent (whom we’ll call “Bob” for the sake of brevity).  In the previous three rounds, Sean had tremendous success with the low kicks and clearly, Bob was feeling them.

One of the most common ways of making the kicked leg heavy is with punches. Everyone understands this as the Ernesto Hoost special. That is how punches synergize with leg kicks.

What about the other way around?

As you can see in this opening combination, Bob’s balance is compromised by Sean’s leg kicks. In order to generate power, in order to defend properly, and in order to move in general, you need balance.

If you, as a human being, had no balance, the only thing you would be able to do is lay down on the floor. You would not even be able to sit up. Leg kicks not only take your base (legs) out from under you, they make it difficult for the muscles in your base to activate.

If your opponent’s balance is compromised, they become a sitting duck. They can neither generate power nor defend properly. If you can break your opponent’s balance, they are no longer a threat for that period. If you want to experience this for yourself, try hitting the heavy bag while standing on one leg or just imagine what it would be like fighting on a slippery surface.

In the final combination of the fight, Sean feints a right straight and transitions quickly into a leg kick that Bob cannot get up from. The feint gets Bob to bring up his defenses. However, it’s clear that Bob’s legs are already too battered, so the moment he comes back from reacting to his feint and into the stance, he’s on wobbly feet. And the last leg kick was just the final nail on the coffin.

The greatest moments in fighting come when all skills synergize together and complement one another. Sean was able to his punches to set up his kicks and his kicks to set up his punches. The lesson here is quite simple: work on your leg kicks. They’ll win you fights.