What Is (& Isn’t) Dutch Kickboxing 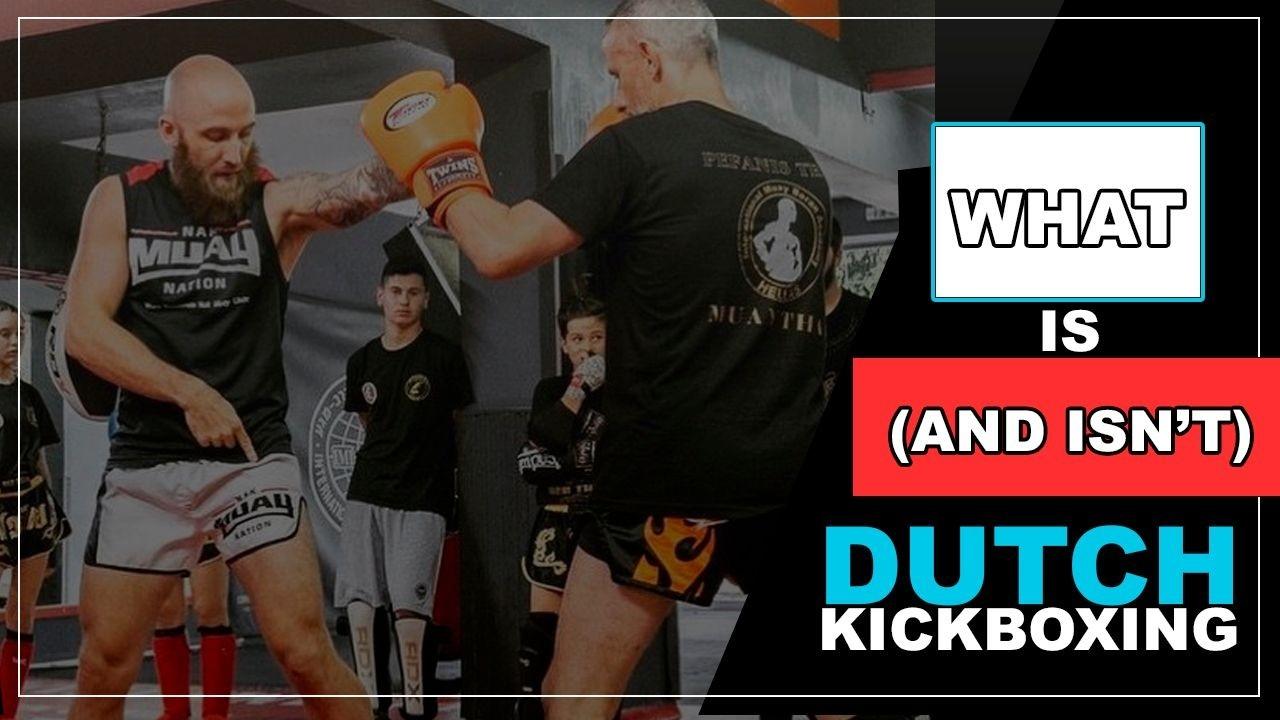 EXPLORING THE ROOTS OF A WIDELY MISUNDERSTOOD MARTIAL ART

Dutch Kickboxing is a martial art with a complicated history. It’s an approach to kickboxing firmly rooted in stereotyping the style of an entire nation of kickboxers, and as a result, we have access to a lot of misinformation on the fighting style.

Today, we will be looking into the history and formation of the Dutch style of kickboxing, and examining kickboxing's relationship with not only Muay Thai but also Japanese kickboxing and the style of karate which influenced it. 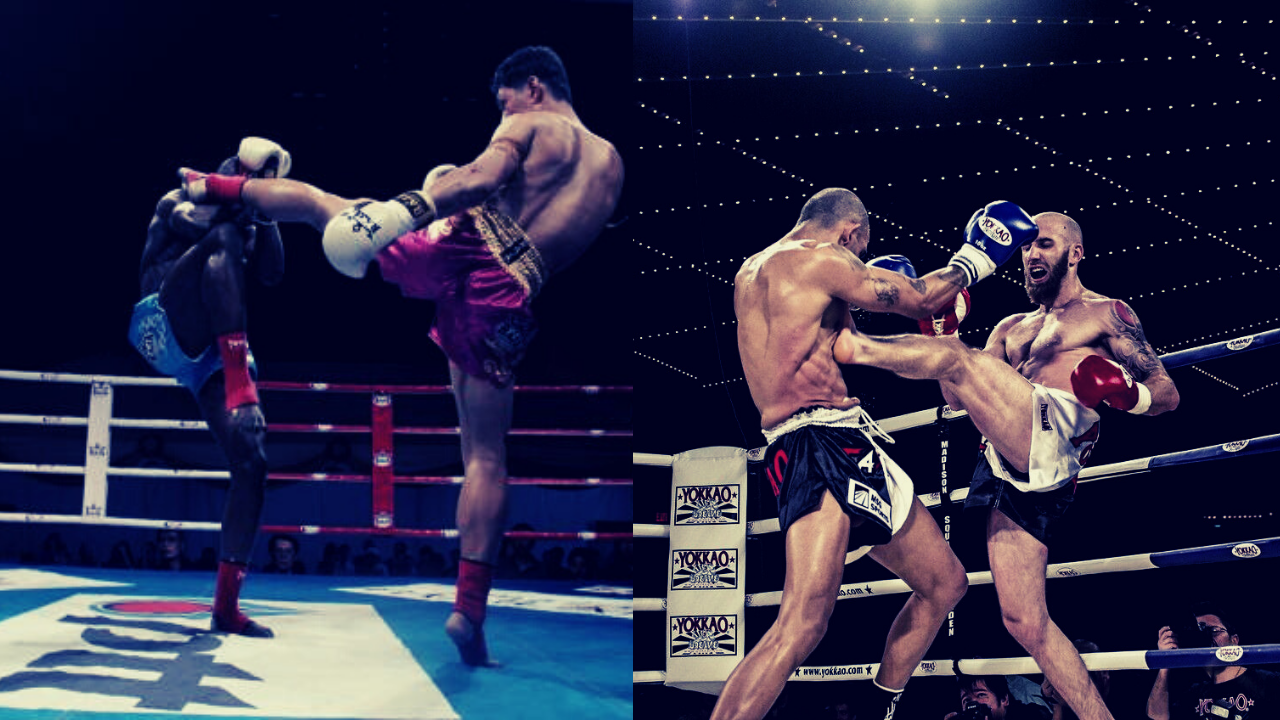 To start this journey of re-education, we actually have to look to Japan and the horrifically misrepresentative cross-style competitions held in 1964 between Mas Oyama’s Kyokushin karatekas and three Muay Thai fighters, under a modified rule set that permitted karate throws that were otherwise banned in Muay Thai competition. The bout was encouraged by Osamu Noguchi, a former boxer and now kickboxing promoter who would later be responsible for the many, many, truly hilarious fixed fights of Tadashi Sawamura.

The results of the trio of match-ups?

This was a point of contention from Kurosaki, who believed that the fight was stopped to save face, as the Thai fighters had lost the previous two bouts. Judging by the fight footage, this is debatable to say the least.

In English, the primary source of information about these fights is a Black Belt Magazine article, published years after the fact that not only gets the year of the fight wrong (claiming it took place in 1963) but also labels Huafai as "an Islamic" and Tan Charan as Chinese.

Coincidentally, these were the two fighters that lost their bouts to the Kyokushin karatekas. This implied that the two boxers to lose their bouts were not actually Thai. (This was demonstrably false.) Tan Charan was indeed ethnically Chinese, but born and raised in Thailand; Huafai was Muslim, but Thai nonetheless.

The facts remain the same; in 1964, three Kyokushin karatekas traveled to Lumpinee Stadium to test their skills against three Muay Thai fighters, and they won the best two of three.

So how does any of this relate to Dutch kickboxing?

Kenji Kurosaki, the loser of the three karetakas, was inspired from the fights, and indeed inspired by Muay Thai as an art.
In the following years, Kyokushin began shifting in direction. Mas Oyama envisioned Kyokushin as the "strongest" karate, and within the art, there was hot debate on what the best way to maintain that might be. Mas Oyama believed that in order to keep karate realistic, it should continue to be practiced barefisted, which means that when it came to competition, fighters could not punch to the face. Instead fighters would look to get a knockdown via brutal body shots and kicks. This is the rule set practiced to this day.

Kurosaki simply didn’t agree. By the 1970s, he had established his own gym, the original Mejiro Gym, named for the district in Tokyo in which it was founded. Kurosaki’s "Mejiro style" became the backbone for much of what we today perceive as Dutch kickboxing.

Testament to Mejiro style's efficacy was Kurosaki's most notable student at the time: Rajadamnern Stadium champion Toshio Fujiawara, the first non-Thai to ever win a stadium title.

Meanwhile, at the same time in Holland, we have Jon Bluming. Bluming is the most influential martial artist in Holland’s history. One of Mas Oyama’s greatest and most favored students, having been awarded a sixth dan black belt from Oyama himself, Bluming taught not only Dutch kickboxing pioneers like Lucien Carbin and Jan Plas (who we will get to shortly); he also taught the founder of modern "street karate" ashihara kaikan, Hideyuki Ashihara, and Semmy Schilt, the greatest heavyweight kickboxer of all time.

Bluming, while not a kickboxer himself, was a good friend of Kenji Kurosaki, having both learned Kyokushin together from Mas Oyama. He would send his students over to Mejiro to learn from Kurosaki. 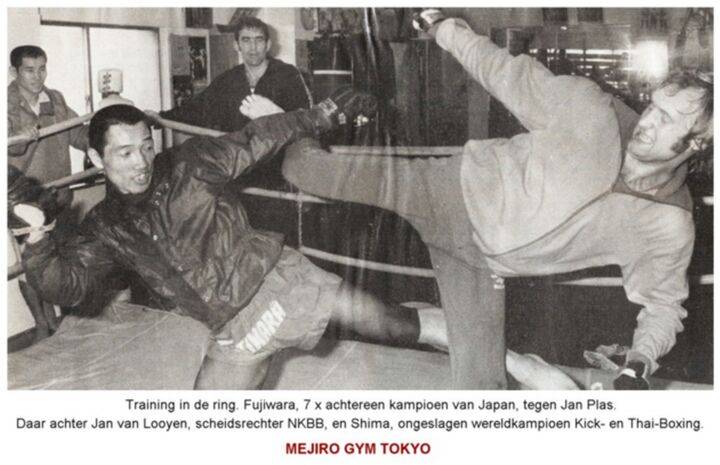 Jan Plas was one of these students. After training at Mejiro, he would eventually set up his own Mejiro Gym in Amsterdam.

Like Mejiro – Toyko, it was a kickboxing gym, and it sought to teach the Mejiro style. From here, kickboxing starts to spread across Holland. Mejiro Gym was frequently in competition with their rivals in Chakuriki Gym, founded by Thom Harinck, a fellow Bluming student who set up his own style separate from Mejiro.

You’ve probably noticed by now that outside of the 1964 fights, so far Muay Thai hasn’t been mentioned very much. So why is it that there was a time where the Dutch style of kickboxing was so frequently called "Dutch Muay Thai"?

The Dutch were aware of Muay Thai and the influence it had had on the Mejiro style of kickboxing. So much so that Thom Harinck in particular put together a team of Dutch fighters and traveled to Thailand to challenge the Thais in their own home.

Harinck attributed this to the lack of Dutch understanding of clinch work, elbows and knees. So, reasonably, they began to focus more on those techniques.

None of this is to say that Muay Thai as an art was completely foreign to Europe. Muay Thai was being practiced in England in the 70s, but Holland’s kickboxing was very much its own beast. As time marched on, we see the two arts get more and more closely associated with each other.

The 1980s-90s is the period typically considered to be Muay Thai’s Golden Age. The economic boom Thailand experienced in this time allowed for substantial growth in talent as far as the sport was concerned. While Dutch and Japanese fighters had tested their skills in Thailand, it was the 1990s that we see the Dutch fighting much more frequently in Thailand.

On February 18th 1990, a Muay Thai card was held in Amsterdam pitting the best of Holland against fighters from Thailand. On that card was a rather young Ramon Dekkers, yet to make himself a kickboxing megastar. He was joined by Rob Kaman and Maikel Lieuwfat.

Dekkers faced Namphon Nongkee Pahuyuth, winning a decision after knocking Namphon down. Rob Kaman knocked out his opponent, the giant Changpuek Kiatsongrit (in what was a rematch from their fight in France) in the fifth round. Both fighters would rematch their opponents from this card in Lumpinee Stadium, Bangkok on April 27th, two months later.

The rematches were radically different. Thai scoring, of course, favors fighters who fight with a more decidedly Thai style, and as a result, both Dekkers and Kaman lost the rematches by decision. Maikel Lieuwfat fought a different opponent, this time facing technical wizard Karuhat Sor Supawan in a losing effort.

If these fights did anything, it was to highlight how the venue in which you fight, and the criteria in which you're scored under influences both the way you fight and the overall result. The Dutch mentality from that point on became: “We’ll get robbed on the score cards, so let's try to knock them out early.” While Dutch fighters weren’t being "robbed" in Thailand, this approach certainly helped to make them popular in the world of Muay Thai.

Ramon Dekkers and Gilbert Ballantine in particular became synonymous with Dutch Muay Thai. They fought Thais and occasionally were able to overcome them under their own scoring criteria. Dekkers was, in 2013, honoured by the Thai royal family for his service to the sport. There is  more to say, but any one of these events from '64 to now could be a book in and of itself.

Throughout the 1990s, K-1 had been the place for the big lads. Heavyweight fighters from Holland and other European countries fought it out each year to crown the K-1 Grand Prix champion.

If you were a smaller fighter, there just weren’t the same opportunities for you to compete on a grand stage in kickboxing. This changed in 2002 with the introduction of K1 Max, a tournament for more... reasonably sized men. From this moment onward, we begin to see Dutch fighters move away from Muay Thai and to K-1 and later GLORY rules competition. Albert Kraus and Andy Souwer in particular led the charge, both of them having won the K1 Max.

Muay Thai Monday: Should I Join a Kickboxing or MMA Gym?

What do we mean by Dutch kickboxing?

The style itself varies from gym to gym and fighter to fighter. Broadly speaking however, Dutch kickboxing is an approach to fighting inspired by a mix of kyokushin karate, Japanese kickboxing and Muay Thai. Depending on what era you look at, you’ll find Dutch kickboxing resembling one or the other more or less. One thing that is always consistent however is the fast pace of Kyokushin karate, which has never left the style even decades later.

What isn’t Dutch kickboxing? It’s probably not Muay Thai. Despite associating Holland heavily with Muay Thai, they are not even the European country most successful in the sport. They don’t have the Lumpinee and Rajadamnern champions of France and Japan.

On one hand, Dutch kickboxing is removed from the typical pace and form that we associate with Thai style boxing. On the other hand, there are probably more similarities between Ramon Dekkers and Thai-stylist Rodtang than there are between Rodtang and Samart Payakaroon.

As the years go by, fighters change and develop, and ultimately, there are only so many ways one person can hit another. Dutch kickboxing is probably not Muay Thai, no, but there are more similarities between the two styles than there are differences.

“The Human Face of Karate” (Autobiography of Tadashi Nakamura)

“Thom Harinck: Godfather of Muay Thai in The West” (Autobiograpy)