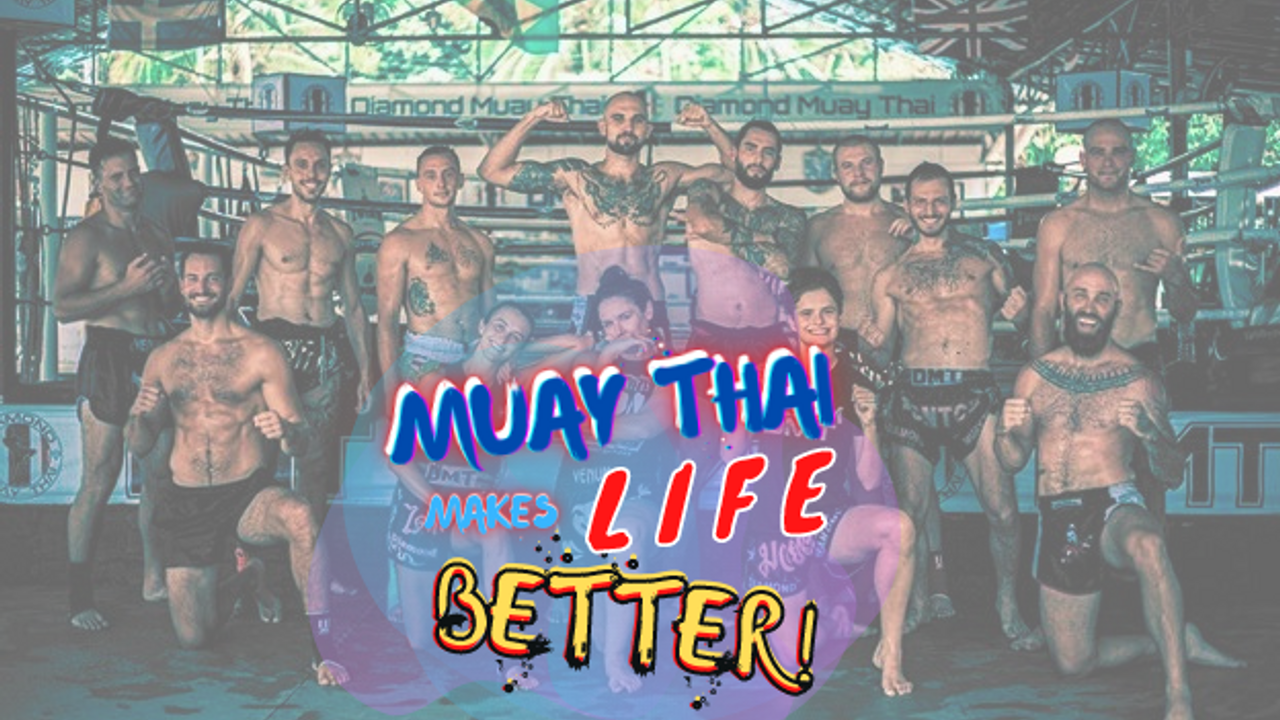 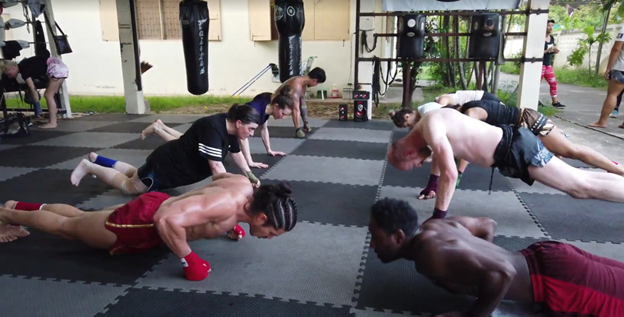 Muay Thai is one of the toughest sports to train for -- and probably the most grueling thing you'll ever endure.

It's hard. It's painful. It's relentless. Muay Thai is like the training montage in Rocky.

With that said, don’t be scared, as there are tremendous benefits worth every drop of sweat.

And trust me: you're gonna sweat. Because Muay Thai trainers emphasize perseverance over everything else:

It will transform you both physically but moreso mentally. The martial arts skills you master translate into your life in ways that you never thought possible, things just go smoother.

By the end of each training session, you’ll feel an urge to get back in again, to grow, to progress, and become stronger.

Let's take a look at three reasons why training Muay Thai is key to success in most areas of your life.

1. Muay Thai teaches you the skill of GRIT - how to persevere and push through inevitable hardships

If the intro got you scared senseless, then let me address it first. Although Muay Thai is grueling and hard, you never start off like that.

It’s very beginner-friendly, and good trainers will always take your current condition and limitations into consideration. You start with baby steps, but quickly progress, always pushing the limit that you’re actually capable of.

With that being said, it’s during this growth period that you start to develop the twin skills of grit and perseverance.

No one's born with grit; it’s cultivated over time and experience, regardless of your background in life. The best analogy of this that I can paint for you is how Muay Thai and the skill of grit translates into entrepreneurship, which is exactly what I went through.

Stepping into entrepreneurship, growing your own business, and developing high-income skills for yourself is like doing hard time in prison for years. You’ll face obstacles like the “desert of desertion”, a long period of 4-12 months where you work non-stop on your business without getting any feedback, no views, no likes, nothing.

This is where 90% of people attempting entrepreneurship and learning new skills inevitably give up, hence the desert of desertion analogy.

And if you’re not equipped mentally for the hurdles, hardships, and failures that are waiting for you around the corner, you’ll not thrive.

This is where Muay Thai comes in. The grit and perseverance you are forced to have in order to perform in Muay Thai also happen to sets you up for success outside of the gym and ring. 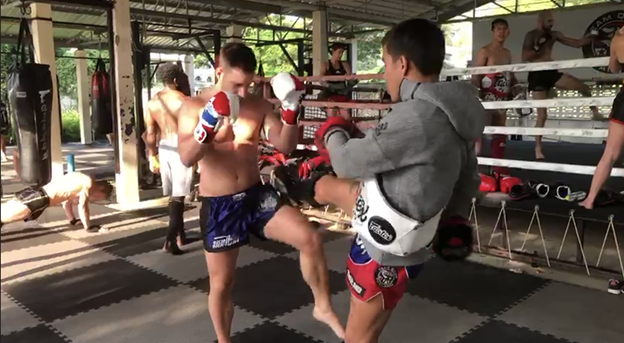 Here's what I did first: I booked a ticket to a Muay Thai Vacations training camp in 2019 and went on a 2-week boot camp (in my 30s at the time).

It was hard, grueling, but so much fun, I met a lot of cool people, and more importantly developed endurance, perseverance, and grit. These skills are still with me to this day, and I’ve not given up.

Whatever life throws at you, you’ll come out on the other side, victorious, your hand raised high.

< CAN YOU SURVIVE THIS 6-MINUTE AB WORKOUT FOR FIGHTERS? >

2. Muay Thai builds a deep sense of confidence that translates over to other aspects of life

One of the absolute best tools to get started gaining that confidence is through training Muay Thai. When you train Muay Thai, which sometimes can be quite challenging just to show up on training imbues you with confidence.

It's not just any type of confidence or that "fake it 'til you make it" stuff. No, no... it’s much deeper than that. Because when you know that the upcoming 90 minutes of training will be brutal, and you do it anyway, that demonstrates and teaches incredible confidence, which only leads to greater self-belief in the end.

Stepping out of my comfort zone, pursuing the business of my dreams without a clue as to what I was doing, and yet still having the confidence that I could make it work -- that was ALL because of Muay Thai.

That's just one example of what a deep sense of confidence can do for you and your life, but keep this in mind:

Deep confidence is never something that you'll find on the couch watching Netflix -- you’ll have to develop it.

Need to lose some pounds and slap that body into shape? You know the answer by now: MUAY THAI!!!

Training Muay Thai 3 times per week will get you going in the right direction, giving you the benefits of the previous points above, burning a ton of calories, and building some muscle at the same time -- the complete sexy package. 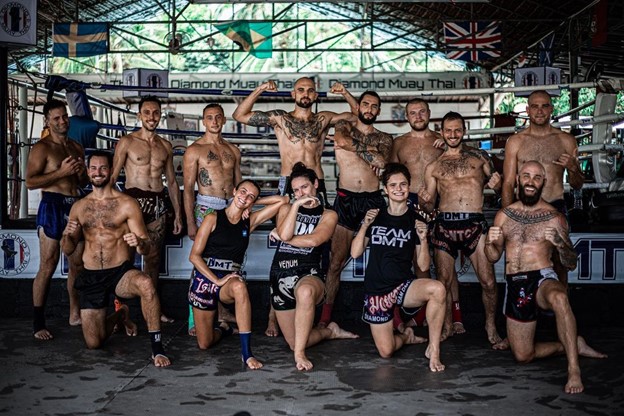 And if you decide to travel to Thailand to enjoy the Muay Thai Vacation in all of its glory, you might pick up a sak yant tattoo or two, adding even more to your overall sexiness (just saying!).

1. How dangerous is Muay Thai?

Training Muay Thai is never dangerous, as you always use sufficient protection in a controlled environment with coaches who want you to progress (and not get hurt). It’s highly individualized; each person trains according to their own level and capabilities.

But Muay Thai is a dangerous martial art, especially if you aim to compete on the top level - always has been and always will be.

That's why the people that fall in love with it; the ones that are really drawn to it never really leave it. It's not about mastering a few techniques, It’s about learning a way of life.

2. Is Muay Thai effective in a street fight?

Muay Thai is a great art of self-defense and one of the most brutal martial arts out there, although it’s never advocated to be used in such scenarios.

Using martial arts in a street fight is taboo, drawing shame to your coaches. You’ll most likely get kicked out of your club for that kind of behavior. But if used for self-defense, it’s an excellent tool.

3. Is Muay Thai better than BJJ?

This debate has been going on for a few years and it seems like it is not going to end anytime soon.

For those who are not familiar with these styles of martial arts, Muay Thai is the national sport of Thailand - a combat sport that uses stand-up striking along with various clinching techniques.

It is also known as the "Art of Eight Limbs" because it makes use of punches, kicks, elbows, and knee strikes. This martial art was developed as a form of close combat for use in actual hand-to-hand combat.

BJJ is an acronym for Brazilian Jiu-Jitsu, a martial art that focuses on grappling and ground fighting. It is a form of self-defense that involves techniques such as throws, holds, joint locks, and chokeholds.

As you can tell, Muay Thai and BJJ are both combat arts, but there are unique differences to them.

Muay Thai is a martial art that originated in Thailand, and it might be the deadliest martial art in the world.

While there is no agreed-upon definition of what makes a non-lethal martial artform "deadly" so to speak, we can say with certainty that Muay Thai is one of the most brutal combat forms.

Training Muay Thai is one of the most intense, difficult, and challenging physical activities as it emphasizes the use of the entire body as a weapon.

This means that you use your whole body in combination to deliver devastating, powerful kicks and punches.