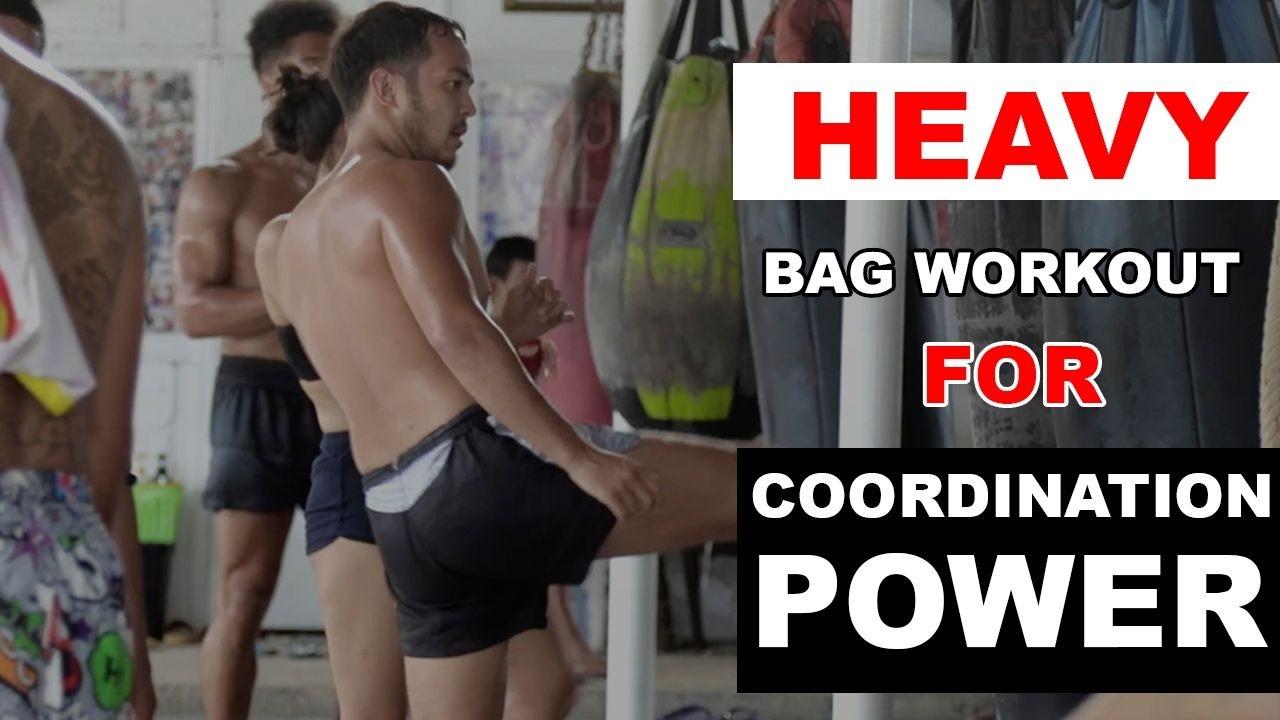 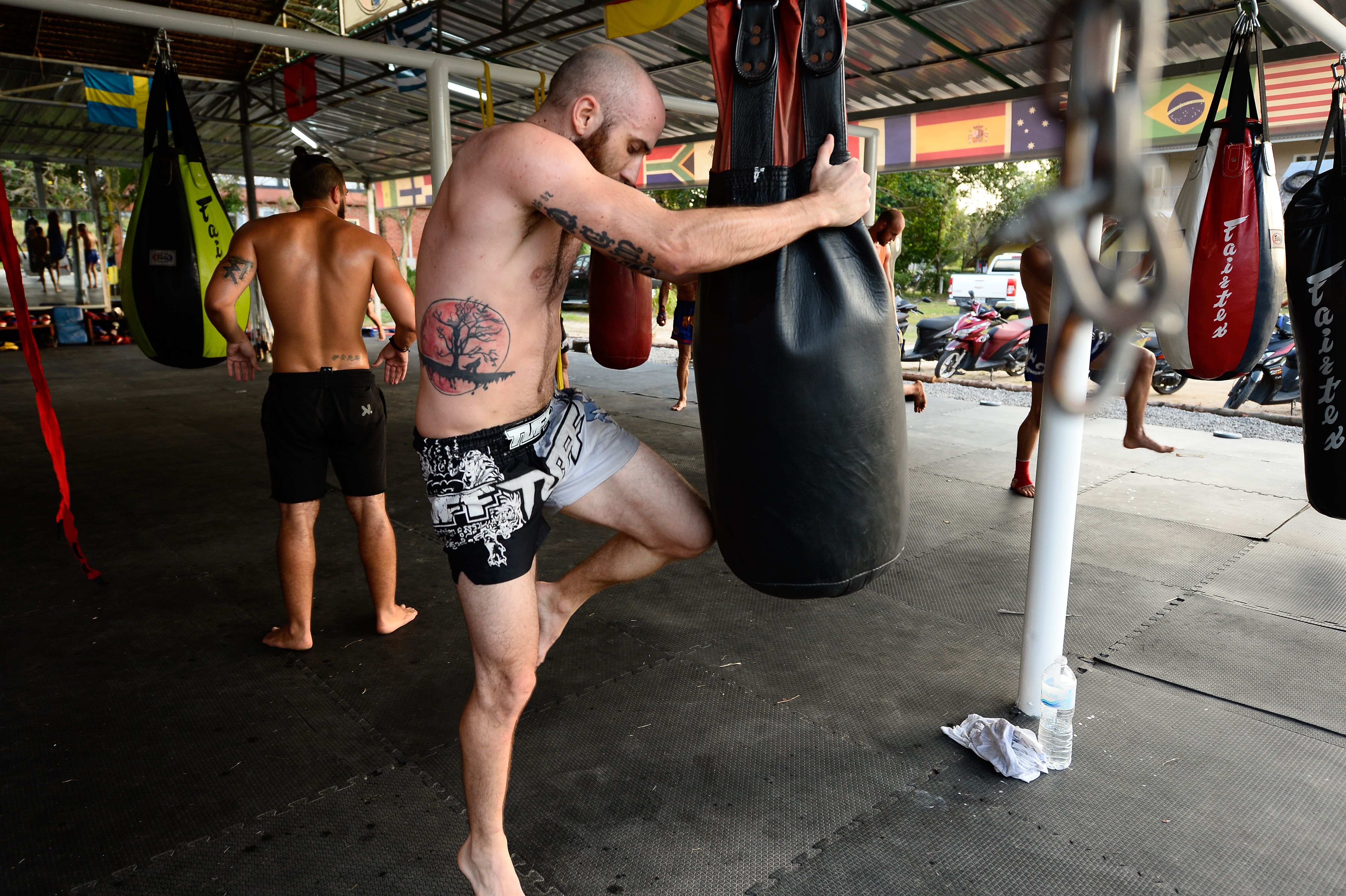 < Note: We have previously discussed heavy bag drills that will build up your balance. This is an expansion of what we talked about last time, so I strongly recommend you read it here before going forward. >

Today we’re going to be looking at heavy bag drills for techniques that will not only improve your balance but also improve your co-ordination on unorthodox combinations.

We’re going to be specifically looking at building punches off of kicks. Conventional wisdom is to lead with a punch (the easier technique to see coming) in order to set up a kick. This is a completely valid way to fight, and it’s not wrong at all to emphasize this in your training. What is often overlooked, however, is doing the inverse.

Throwing a kick, at half power, to follow through with a powerful punch is an underutilized and formidable approach to fighting that has given some of the best kickboxers in history knockout success. Andy Ristie, Andy Hug and (the remarkably non-Andy) Sagat Petchyindee have all built power punches off kicks to surprise opponents.

Why is this a heavy bag workout though?

While you do not need a heavy bag to do these drills (modifications will be provided) a heavy bag will be the safest way to practice this at first, as the bag absorbs your power and allows you to "bounce" off the bag and into your next move, with less chance of you spinning out of control from lack of balance and spraining an ankle or knee.

First, let us talk about some easy concepts before you get drilling.

1|How To Punch Off The Kick Effectively

The power of your kick should be adjusted accordingly to whether or not the kick was the first technique in the chain you are creating. If you lead with a punch or a teep, you can afford to put more power into your kick in order to hurt with the kick, as well as with your follow up punch.

Should you lead with the kick, it is crucial that you lessen the power and make it a distraction for your punch, as putting too much power into a leading kick has a high risk of it being countered.

Regardless of whether your punch is coming from your left or right hand, your punch will always be coming from your rear side. If you want to land your lead punch, the kick must land you in the opposite stance, to transform that lead punch into a rear straight or hook for maximum effectiveness.

If you are not used to moving in this way, expect to feel janky, off balance, and exposed. Please understand that this is not a flaw in the technique, nor is it a flaw in you as a fighter/martial artist. It is simply the effect of you moving in a way that you are not yet comfortable with... yet.

! Modification For No Heavy Bag

If you are learning these techniques for the first time without a heavy bag, I would strongly recommend you practice these movements with a cheerleader kick - that being a round kick that is mostly coming at an upwards trajectory. You can still turn the kick over, but don’t try to swing as far into the kick as you would on a heavy bag, as the torque you’re about to create going from a round kick to a punch could lead to you falling and potentially injuring yourself.

On a clock’s face you want to kick from 5 o’clock to 11, 7 o’clock to 1 o’clock. This will give you enough rotation to keep the kick realistic without compromising balance.

Once you have this, you can work all of these techniques in shadowboxing.

This is the first combination we are going to practice to begin to build the co-ordination without compromising too much balance. You can move about the bag, ensuring you are in a close range, throwing one-twos and then following up with a rear knee.

As you pull the rear knee back into your stance, it’s time to throw a rear hook. Your punch should land at the same time your foot hits the floor. Your stance doesn’t change during this movement; you bring the foot back to where it was before the knee. If you are finding it difficult, try stamping your foot back down on the ground as you punch. Sometimes feeling the ground firmly beneath you will give you more confidence in the technique to throw it a bit harder.

The knee-into-hook is the foundation of all of these techniques and the one you should be most comfortable with. It is the technique you can use with the least risk to your balance and least risk of counter.

When you are comfortable with a rear knee into a rear hook, we can swap the knee out for a kick at a longer range. When you are too far away from the target to land a knee, we can comfortably throw a kick, pull the leg back and, once again, land our right hook.

If you find you are having persistent trouble with balance on this technique, implement a chamber: bring your knee up, then extend the kick Karate-style before landing the punch. This will give you a little bit more time to land the kick and think about the motion you’re creating.

When you are comfortable with this technique, you can add an additional drill of throwing a switch kick and following the switch kick with a lead hook. This is a more advanced bonus drill.

For many, this drill might actually be the easiest, as it requires us to do something generally seen as a flaw in proper kicking technique.

We throw our rear body kick, but instead of retracting it back into our stance, we plant our foot down in the opposite stance and throw our lead hook, which has now become a powerful rear overhand.

The kick serves not only as a distraction but a huge penetrative step onto your opponent’s center line. It’s very likely that you will have your lead foot slightly behind him as you throw your punch. This makes the amount of damage the punch can do monstrous.

If you have ever thrown a superman punch, this should feel similar to you. Sagat referred to it as a "cobra punch," and it has a similar name in Kyokushin Karate circles and at Tristar Gym.

This combination was also a favourite of K-1 legend, Andy Hug, and can be seen in pretty much any highlight of Sagat Petchyindee, although he made his best use of it against Peter Cunningham.

As we’re throwing a straight punch this time, we need a different body movement in order to get power into the punch. The momentum of the leg returning to the ground isn’t enough to power the punch this time. Instead, we have to kick upwards and then twist the body, pushing the rear shoulder out and forward to the target. The foot can either land on the floor in a long, punching stance, or it can still be in the air behind you, like what you would see in a superman punch.

The best way to train these drills to start with is to build upon each of them during timed bag rounds.

Five rounds, three minutes for each one on the bag or in shadow. Start with just throwing one-two combinations and using the knee-to-hook. In the next round, do the same but replace the knee-to-hook with the kick. Do the same for each of these rounds until you reach the fifth round, by which time you will have had a round with each one of the techniques. For the fifth and final round, try to use all of them while mixing in a few punches and setup kicks.

This workout is relatively simple and shouldn’t be too tiring if you’re focusing on the techniques we’ve listed today. What it will give you is much greater co-ordination on your strikes and give you far more variety and option when sparring or fighting. It grants you a lot more punching power too, purely by virtue of giving you this expanded repertoire of techniques that the opponent likely will not be expecting.

Have fun and train hard!