Tracking The Best Fighters In All Of Combat 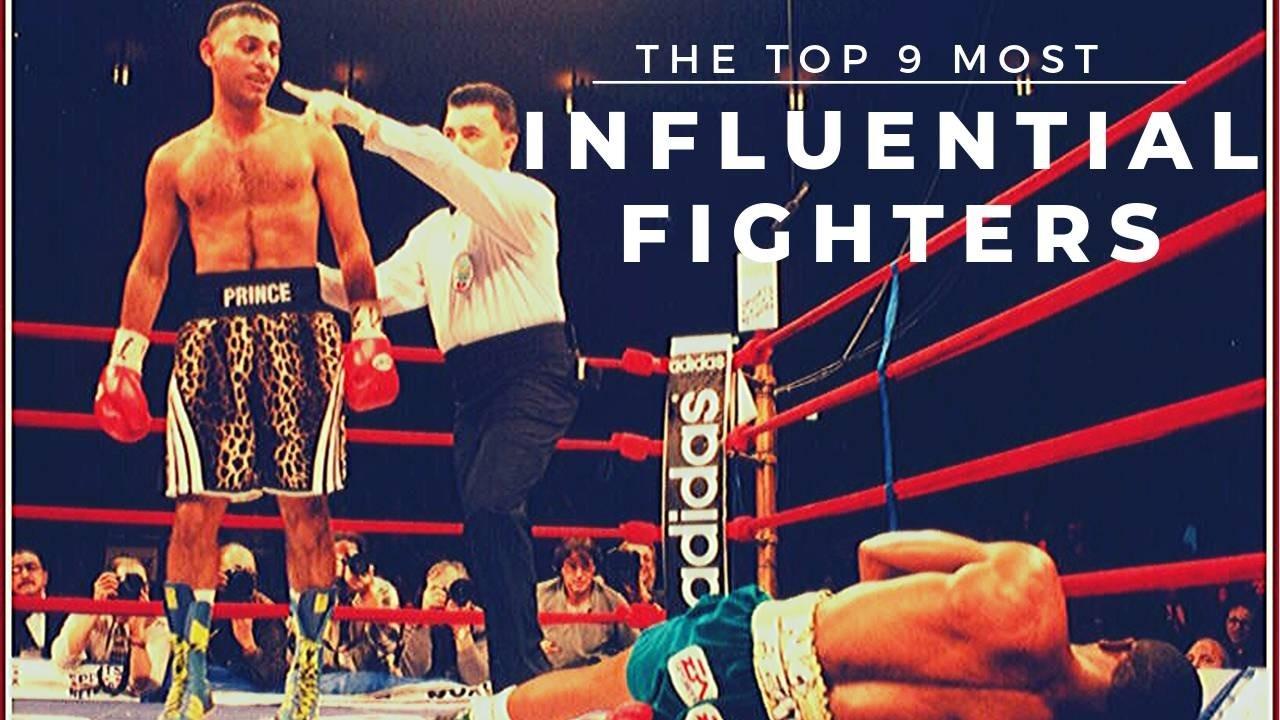 THE TOP TEN MOST INFLUENTIAL FIGHTERS ACROSS COMBAT SPORTS

We often see top X lists revolving around some sort of variation of “Who is the P4P greatest (insert combat sport) fighter of all time?” This tends to open up the subjective conjecture floodgates instantly. Soon your favorite fighter is being derided, you’re comparing someone to Hitler and the topic ultimately peters out with nothing of substance having been said or realized.

It’s just the nature of the conversation and it’s all in good fun most of the times. Who doesn’t love it when the “Keyboard Warrior Memes” start flying around?

I often think, “Why do these topics, which should simply be fun and lighthearted, so quickly devolve into online verbal death matches?”

I think the answer is because perhaps our identification with certain fighters and certain types of fighters tends to resonate with us more so on an emotional or personal level than it does on a rational or global level. So naturally when someone challenges the legitimacy of our favorite fighter on a global scale, we take it somewhat personally.

As a result, I decided to make the criteria personal to myself with no regard for global standards and criteria, then I composed my own list and posted this question to my friends in an attempt for them to personalize their own top ten NINE list:

“Who are YOUR most influential fighter for you and your journey and a martial artist or fan of martial arts?”

The rules are simple: Any fighter, any combat style, explain what they or their career means to you or why they are so influential to your life. There are no right or wrong answers!

Below, I’ve included my own personal list [in order] and the reasons why:

Anyone who knows me already knew who my number one voice would be. In my opinion, Miriam is the pound for pound, gender for gender, BEST Muay Thai fighter in the world.

But beyond that, when she enters the ring she fights with a furious calm unlike anything that I’ve ever seen. Her calm is simply inspiring. When I think of how I want to be able to perform as a fighter I want to be that calm, that technically sound, and with the ability to execute my will that violently and look cool doing it.

But for me her influence is about more than my simply feeling like she’s the GOAT. I’ve been following her career since about 2006 and I credit her career with fostering my love for and desire to see women elevated in combat sports which is a huge passion of mine. I had the pleasure of meeting Miriam at Lion Fight 21 and I was blown away not only because she was nice enough to take a few minutes to talk to me, but also at how humble of a champion she was to the extent that when I told her my belief of her being the GOAT, she laughed, said “Aww, I’m okay,” then genuinely passed the credit on to another fighter.

So skill and face cracking greatness aside, when I introduce fighters of any gender to the career of an all time great who embodies what it means to be a champion both in and out of gloves, it will always be Miriam’s.

When I was a kid I watched Tyson and while I never tried to mimic his style too much( [I like to finesse shit), I did take something from his career that I felt was even more powerful than his punches and his defensive acumen.

Mike Tyson taught me how to scare the shit out of people when I wanted to. Being able to intimidate another fighter is a skill of immeasurable value that few did better than “Iron Mike.”

Perhaps the greatest offensive fighter to ever lace’ em up!

Nasty feints, beautiful footwork for days and he always knew the exact moment when you stepped into his range. He was a big influence on the way that I fight because studying him helped me develop an eye for unorthodox striking angles and escaping.

His ability to hit you and angle off before you could return fire or land a clean shot was more than just about his speed. It was his vision and ability to anticipate what was coming next that was his true gift. Ironically, his vision is more so on display when he’s commentating fights these days. Listen to him and you’ll really see how brilliant his fighting mind is and it really puts into perspective just how good he truly was at his prime and that it wasn’t just the speed blinding everyone.

If my punching combos ever looked that clean, no one would ever be able to tell me shit!

As pocket fighters go, he’s one of the all time greats without a doubt. What I truly love about watching Andy Souwer work isn’t just how clean & crisp his combinations are. He is so technically proficient that, where a lot of fighters will pick their opponent apart at range, Andy can sit inside the pocket with an eerie patience and exploit the tiniest openings. That’s pure talent.

There is nothing that I could say about this man that hasn’t been said about a true God of War.

But for me, what always stuck with me is that Dekkers TKO’d Bang Ludwig with punches. He did this despite having only one functional punching arm for the entire fight! He literally never threw a punch with his bad arm! Most fighters would have pulled out or they would have got into the fight and attempted to pot shot their way to a decision. But not him. He stalked Ludwig and stayed in his face the entire fight.

Ludwig had to have felt like he was fighting the Boogey Man that night because watching it sure felt like you were watching the Boogey Man hunt. It was the kickboxing equivalent of that scene in “A Bronx Tale” when Sonny locked the bikers inside the bar and said “Now you can’t leave.” That was Dekkers that night. That’s a damn fighter! What he is to me is an inspiration and a testimony of how far a truly indomitable spirit and perhaps a bit of crazy can take you.

He kills people and has fun doing it!

To me, Saenchai embodies what fighting should be about. What life should be about. He clearly works hard to be one of the best but he always seems like he’s having fun. But along with that, he has the best in-and-out game around and crazy stupid angles, son! Angles for days!

My favorite aspect of Saenchai’s game is the level of creativity he brings to Muay Thai. A Picasso inside the ropes, he is probably the biggest showman that Muay Thai has today.

#7 Ernesto Hoost (Because… Fuck Your Leg)

I stole so much from him when I first really fell in love with Muay Thai. I’d watch his fights over and over again studying his setups and foot placement, leg kicks, distancing, etc then teach myself how to drill what he was doing. Studying him is, in part, why I’m so good at handicapping fights.

Hoost was not a near perfect or flawless fighter by any means, and his game was also not overly complex or intricate. But he had mastered his craft to the point that his game became the epitome of “You know what’s coming. You’re a daisy if you can stop it.” The good part about fighting Hoost is that you knew the low kick was coming. The bad part was that he was going to crumble you with it anyway because he was that good.

Yeah, yeah, yeah. The guy is a dick and apparently a dope fiend. But in that cage he stands alone and if he makes it back from his current legal issues mentally intact he will go down as the greatest MMA fighter ever (Mark my words). But the reason why he’s so influential for me is because he has supreme confidence in himself ALMOST TO A FAULT!

I say almost to a fault because his confidence in himself goes so far beyond just believing that he will win a fight. He will go into the fight and fight his opponent at what his their main strength and what is supposed to be his opponent’s best chance to defeat him. He does this time and time again and soundly destroys them at their own game. That’s more than a champion. That’s a warrior & I respect that. That will suck the soul from any fighter. I don’t care how tough you are.

He was one of the greatest showmen leading up to and inside the ring that boxing has ever had. He was such a showman that I think it actually overshadowed his true talent. He was another fighter with impeccable footwork & stupid stupid stupid angles, son! His ability to attack in (what I call) the “between spaces” is something that I definitely took from him and still practice doing to this day.

If there is point A & B. Fighters usually attack at point A, move to point B, then attack again. They may mask between A & B but it’s often just decoys. Prince would fire legit attacks between A & B and catch his opponents off guard. I loved that because you can’t always anticipate what happens in the between spaces as not many fighters can fight there. 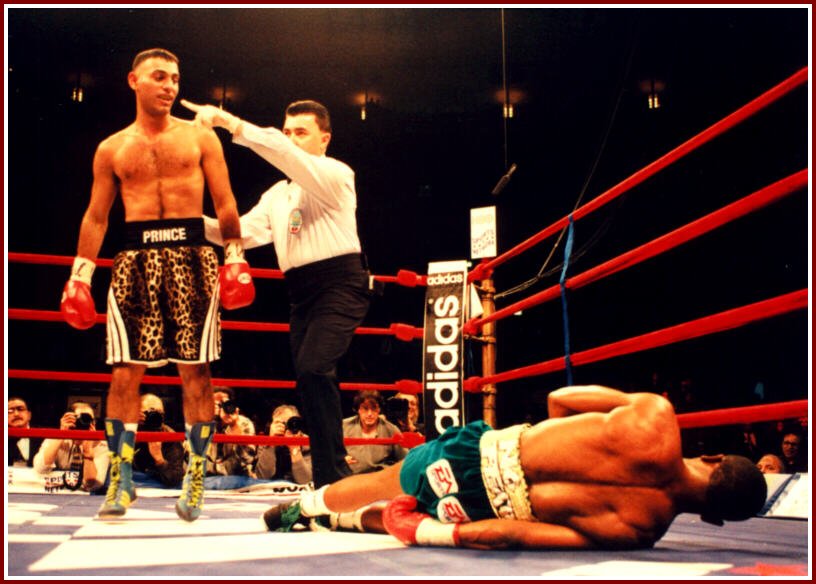