The Art Of Losing: My Thoughts After a TKO 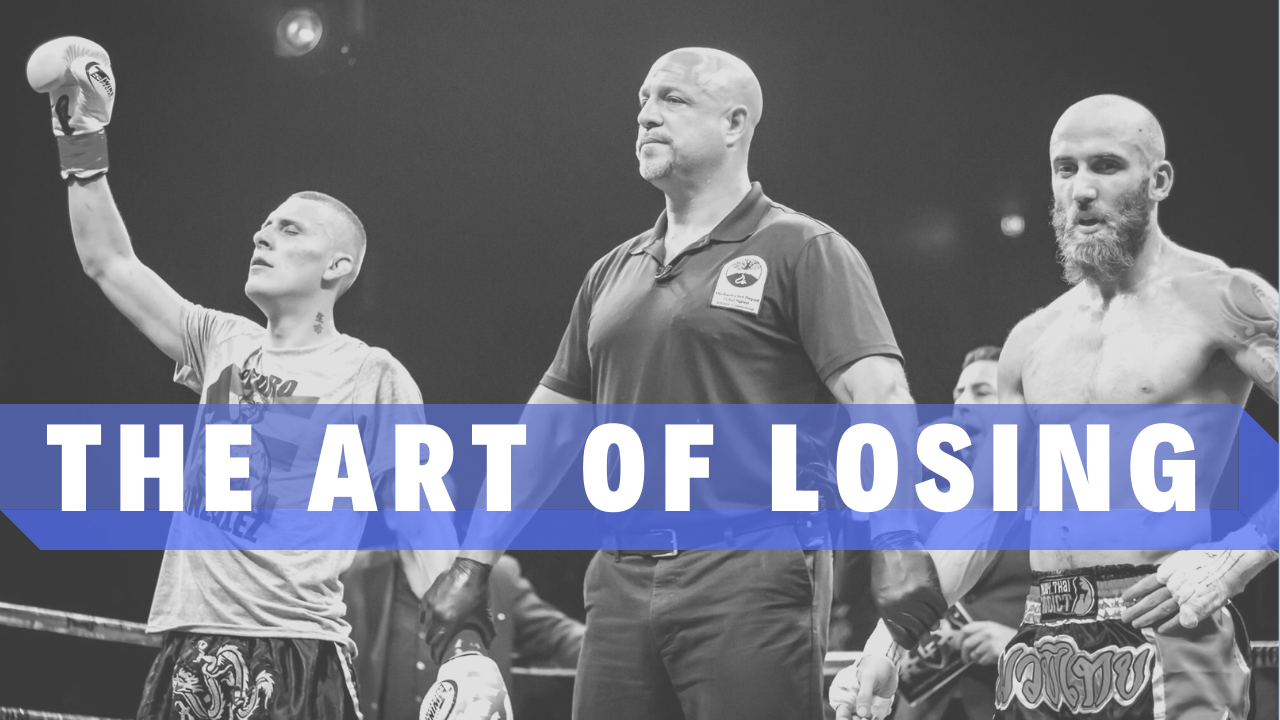 LOSING SUCKS BUT IS ABSOLUTELY NECESSARY TO GROW

It’s fight night. You feel more ready than ever to step into the ring and you feel confident about coming away with another hard-earned win. How could you not feel that way after all the hard work and sacrifices you’ve made, right?

You’ve obsessively watched your diet for weeks making sure you were simultaneously losing weight, eating healthy and getting enough nutrients into your body to train hard.

You just finished warm-ups. You take the walk down the hallway towards the ring. You start to feel the energy of the crowd and you hear the music blasting it’s bass loudly through the arena. Nothing is really going through your mind anymore, just that you’re ready to fight.

After a little wait, you’re motioned to enter the ring – so that’s what you do. You do your routine of entering the ring, sealing the corners, hearing your name announced, acknowledging the crowd and then getting the rules from the ref in the center of the ring as you stare your opponent down. Finally, you head back to your corner and wait for the bell.

You touch gloves and it’s on.

A minute later. It’s over. You lost.

“What the fuck just happened?”

You just got TKO’ed in the first round. All that hard work and sacrifice led to nothing but a disappointing, embarrassing showing where you under-performed and got finished early in front of your friends, family and fans who paid to come and watch you fight.

Yup. This is essentially what happened to me this past Friday… it wasn’t one of my best nights.

Turan’s 3rd and Final Knockdown of Me

This is the first question I asked myself after I lost. Not that I didn’t actually know what happened, because although I was technically knocked out, I remember everything relatively clearly. That being said, I’m still figuring out whether or not it’s a good or bad thing I remember the fight, because all I keep doing it is replaying it in my mind!

But the question isn’t “what happened?” It’s HOW did it happen?

What did I do wrong? What mistakes did I make? How did I lose the fight?

The answers to these questions would go on forever if I decided to actually write them out, so I’ll spare you. But these are the questions that are undoubtedly going to come up immediately after a disappointing loss… but they aren’t the only questions that need your attention.

This simple question was easily the most scary question I kept asking myself because it kept leading down a path of regret, sadness, anxiety and doubt:

“Where do I go from here? I mean, I suck right? I got knocked out in the first round, I must not be made for this sport.”

“How am I even supposed to show my face again? I mean I made a whole website about Muay Thai and I can’t even make it out of the first round… that’s ironic. How will anyone ever take me seriously after sucking it up so badly?”

“Fuck this Muay Thai shit, I’ll just live on a beach somewhere, delete my website, live off the land while doing yoga and smoking weed every day. At least there I can’t get knocked out or embarrassed badly in front of a crowd that way… right?”

Yes, that last one was actually a serious thought of mine.

Believe it or not, that wasn’t even one of the craziest ideas that kept filling my mind rampant. I even thought about growing my hair out and shaving my beard… that’s when I knew I was being ridiculous. But even though I knew these ideas were comical, it still didn’t stop me from thinking of more bizarre thoughts – I mean as long as I wasn’t thinking about how badly I got TKO’ed, it helped kept me “sane.”

I felt lost and extremely uncertain of what was next.

It feels like the whole world is coming down on you after you lose a fight. Zombies could easily be spawned from the Ebola virus and you’d still be sulking in misery from your loss… but it doesn’t have to be that way.

You didn’t die. Someone you know didn’t die. Your family and friends are still there for you. Your training partners and kru still support you. Your girlfriend still loves you. Your dog still jumps on you when you walk in the door. You still have a roof over your head. You are still healthy (maybe not as healthy as you were before, but still a lot healthier than most people).

Yes, I know, it still sucks, trust me. I mean, I put endless hours and effort into perfecting a skill that I didn’t even get to showcase at all. All the fans who came to watch me didn’t see all the work I put into my training camp (and they never will), all they saw was that I got finished in the first round. That’s pretty shitty if you ask me.

But it’s not the end of the world.

Surround Yourself With Positive People

I haven’t lost for awhile. And even when I did lose, they were close fights that I thought could’ve easily went my way. I always prided myself in being a tough mother fucker who hasn’t been dropped in any of my fights, but in this fight, not only did I get dropped, but I got dropped 3 times in the 1st round of the main event without putting up much of a fight. It truly felt like the world was ending.

But, believe it or not, the apocalypse didn’t occur this past weekend and life went on as usual.

Fortunately, the people in my life were able to point that out to me, otherwise I would’ve thought that Zombies inherited the earth and were spreading the Ebola virus to the living by eating their faces off.

Although at first it was extremely difficult to see my training buddies, my kru, my friends, my family, my fans and my girlfriend after the fight, they all helped me cope with losing in one way or another.

SPENDING TIME WITH MY DOG (SUAY) AND GIRLFRIEND LIZ HELPS KEEP THINGS IN PERSPECTIVE AND DEAL WITH THE TKO LOSS.

My girlfriend Liz helped just by simply being there.

My friend Gina was there to lighten to mood and make sure I got Oreos.

My current kru JJ, my old kru Brandon and my training buddies Chris, Jon and Al could all relate to what I was going through.

My friends and fans still came up to me, emailed me, messaged me, and called me to show their support and give me some words of encouragement.

My dad gave me his support just like he would during a win.

And my mom hugged me and told me I’d do better next time even though I know she hates fighting.

Having this solid support system there for me right after a tough loss was crucial in keeping me from falling into a dark hole of depression. I am very fortunate to have these people in my life and I can’t thank them enough for being a part of my journey through the good times and the bad.

If you are fortunate enough to have loving, caring people in your life, don’t be afraid to ask them for help during tough times.

Although it’s been less than a week since I lost, I feel like I’ve been able to get over the loss relatively quickly. A big part of the reason I got over it is because of my girlfriend Liz, my family and my fans. Another reason I feel like it’s been easier to move past this setback is because I made the decision to.

Yes, if you want it to be, it can be that simple. If you’re going through a tough time, just;

Accept it. You lost. But it doesn’t mean you have been defeated. What it means is that now is your chance to grow and become a better person and fighter because of it.

Is it OK to have doubt?

Absolutely! Don’t you remember? I thought about quitting Muay Thai and moving to a tropical island to grow my hair, shave my beard, become a hippie yogi, and smoke a lot of pot (which to be honest, actually sounds pretty awesome), but I’m not quitting, because I know what I want and I know that quitting would be a bitch, cowardly thing to do… and I’m not either.

Even the best lose and get knocked out. All-time greats like Saenchai, Buakaw, John Wayne Parr, Giorgio Petrosyan, Tyrone Spong, Peter Aerts, Manny Pacquaio, and Muhammad Ali have tasted defeat. But instead of letting it snowball into an avalanche of failures and setbacks, they were able to stop the negative momentum and use it as a learning tool to improve and grow.

I want to leave you with this:

I absolutely HATE losing. I also hate disappointing people and being embarrassed in front of my supporters. I also hate putting in endless hours at the gym and cutting weight just to lose a fight in the first round.

I fucking LOATHE and DESPISE quitting or giving up. In my mind, there isn’t much worse than giving up on your goals and dreams because of one setback or obstacle in your way. If that one challenge is enough to derail you and stop you from pursuing your goals, did you really want to reach those goals that badly in the first place?

It all comes down to asking yourself the right questions and being open to what your heart and mind are telling you.

“Are my dreams really what I think they are?
“Do I really want to be a fighter?
“Am I ready to deal with more tough challenges along the way?”
“How can I use these challenges to be better for next time?”
“Am I willing to work harder and make changes to reach my ultimate goals?”

These are some of the questions I had to ask and answer honestly with myself.

But the real question is, are YOU strong enough to overcome a devastating loss?