Shielding Your Shins For Muay Thai 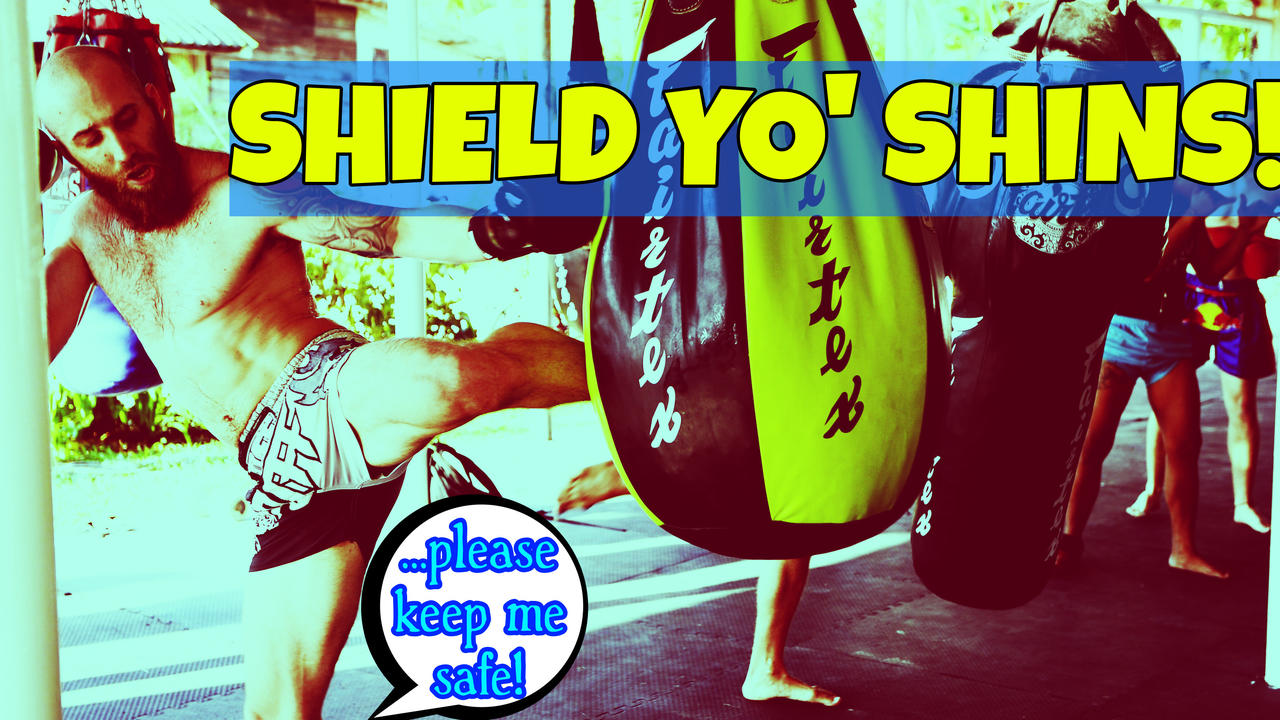 BREAKDOWN AND BUILDUP: THOUGHTS ON PROTECTING YOUR SHINS

Lumps and bumps are part of the deal when you sign up for Muay Thai, whether you want them or not. Soreness and pain in the shin area is experienced by nak muay of all levels. In terms of the pain itself, not too much can be done, but there is good news: it gets better with time.

When starting out, it’s completely normal to get bruising on all points of contact, shin area included. The shin may even be the area that delivers the most surprise to you. Knees and elbows are used to taking the brunt of it when you fall or have other misfortunes due to clumsiness, but shins comprise a big area that generally go unscathed (at least, not in the same way as your knee and elbow joints). Therefore, arguably, the shins are the least prepared part of the body for the newcomer.

Kicking the heavy bag for the first time feels extremely painful to many, and everyone gets bruising. With time, the nerves get used to the impact and you start losing the feeling of pain. The skin also becomes tougher. The body will start depositing more calcium to harden the bones and bruises eventually become smaller and smaller.

THE SHINS OF A FIGHTER

Taken to another level is shin soreness associated with fighting. Fighting without gear means the possibility of shin-on-shin contact… and if there’s blocking and kicking happening (which there will be), you’re guaranteed to have legs sore to the touch afterwards. This is the same phenomenon as when one first starts, but with much more intensity.

While ice and painkillers will dull discomfort, the principle of time still stands. As you rack up more fights with no gear on, the less your shins will hurt and the recovery time becomes shorter and shorter.

The situations described above are painful but by no means an immediate risk to your health. There is a scenario, however, that should require medical attention. This scenario is when you are unable to put weight on a leg or perform many actions without excruciating pain in the shin area. It can be also extremely painful to the touch.

The tibia, which is the shin bone, holds a lot of your body weight and is essential to doing many physical activities. Any serious damage done to its integrity will be obvious. If this is the case, there could be a fracture (stress or otherwise).

While soreness and bruising described previously is fine with some management, a break in a bone requires you to stop training and seek medical attention. Training on a fracture will only exacerbate it and turn it into something much more serious. If you were sitting on a glass panel and saw a crack, what would happen if you got off it? Nothing else, probably.

Now what would happen if you jumped on the crack repeatedly? It would get bigger in size and the glass would eventually shatter. A similar analogy can be made with a fracture, but in the case of the human body, factors are more favorable. Cracks eventually heal, unlike with glass.

Learn to distinguish what is considered normal soreness and pain, and what is considered much more serious. Bones are nothing to be messed around with, so doing the smart thing will only set you back a little bit of time, while ignoring it will cost you much more in more ways than one. When in doubt, always play it safe and get it checked out, especially if symptoms get worse or last for more than a week.