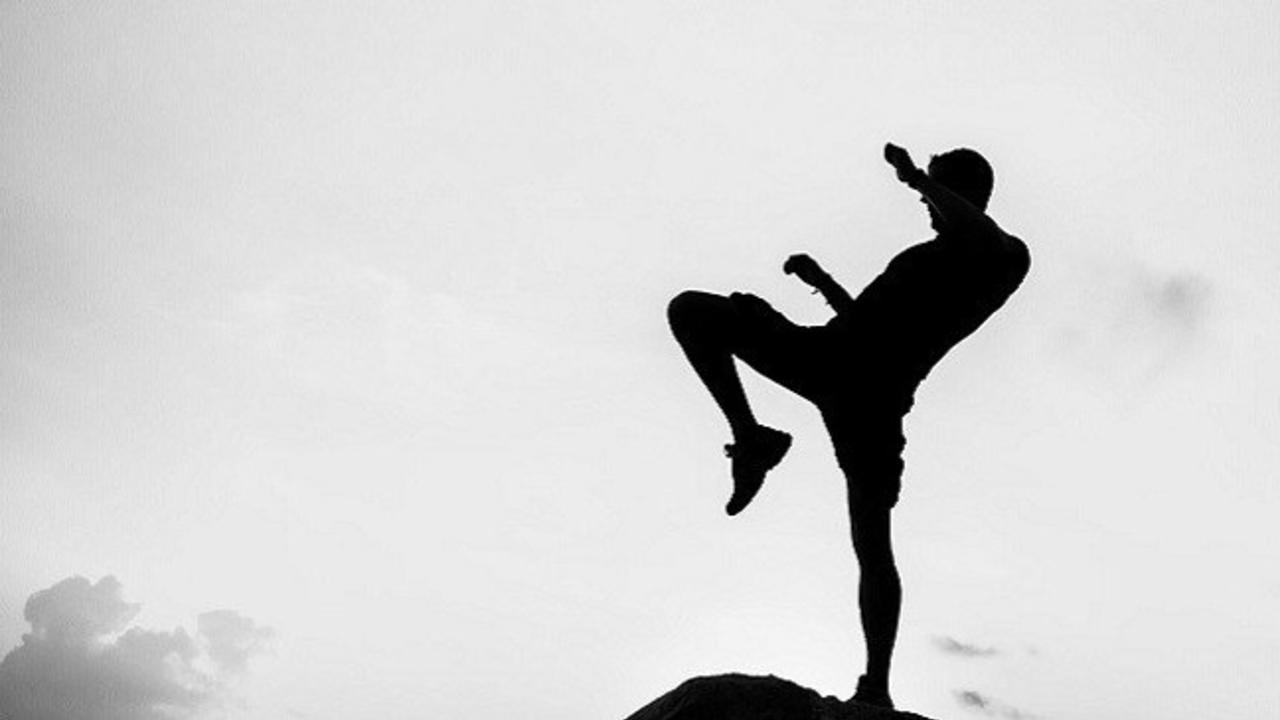 The only distinct memory I have with my Judo instructor was when we were sitting on the ground after practice one day and he was moving around pebbles with his feet and pressing his toes against them. Thinking it was some sort of training or technique, I inquired. He told me, “I’m crushing these pebbles into smaller rocks.” It sounds like a joke, but he was 100% serious. I lost interest in Judo shortly after that.

My next adventure was Karate. I was 10 years old in Detroit, Michigan. I didn’t have many friends as I had recently moved. My mother wanted to sign me up into something I’d like, giving me the chance to meet other kids with similar interests. I know there are forms of Karate that are more realistic and better for real life application, but whatever style I was doing, this was not it! My instructors were Caucasian, overweight, and didn’t inspire much confidence in us students. They got out plastic guns and knives, instructing us to practice disarming techniques. I never went back after that first class.

My first two entrances into the martial arts world were brief and disappointing, but Muay Thai was still a ways’ away for me.

THE ROAD TO MUAY THAI

Then I took a long hiatus from martial arts. I was too busy navigating the awkwardness of my teenage years in middle class suburbia. I was overweight, played only pick-up basketball for an activity, and mostly played video games. Then at 16, I decided to give boxing a try. I trained under a local champ -“Al Irish.” Well, actually more of an underling, but it was his gym! I finally felt that I was getting real fighting experience.

Training was actually mostly strength and conditioning. We shadowboxed without much direction, did some bag work, and we did spar once a week. I trained just under a year and then his gym closed down. I was saddened because there was no other “real” boxing gym in my area. Everything else was cardio boxing. So here I was back to square one once more.

College rolled around and I took an elective class called “Emotional Intelligence.” I was 23, still living in Metro Detroit. Our project for that class was to do something we’ve always wanted to do. Well, I always wanted to be a lean, mean fighting machine, and since “Ong Bak” was my favorite martial art movie at the time, I looked up the closest Muay Thai gym in my area. I landed at Warrior Way in Commerce, MI, training under the legend Matee Jedeepitak, better known as “Dragonleg.” I had no idea of this man’s feats except that he was Thai, so in my mind he must be legit.

After my first class I was hooked, I felt like I learned more in that one session of martial arts than I did my whole past. And once I understood the invaluable experience of having a two-time Lumpinee champ as my instructor and right in my own backyard, I trained no less than five times a week. With punches, kicks, knees, and elbows to make up a deadly arsenal of strikes as well as the clinch that allows you to knee, elbow, sweep, and throw your opponent to the ground, I felt I found the most complete striking art in the world.

I finally felt at home.

So, why wasn’t it the others – and why was it Muay Thai for me? I wanted “real world applications” in my martial art.

Karate overall has limited effectiveness in real-life situations. Most Karate students have little fighting experience. Their way of training is more theoretical than actual practice. Boards don’t hit back. Some Karate styles are more aggressive, with people sparring and practicing actual technique in competition settings, but it still has its holes. The hands are usually kept low which is an invitation to get hit in the face fairly easily. The stance tends to be heavy which, can make you prone to be swept or kicked in the legs a lot, and blocks taught could potentially hurt your limbs to save your face or body. It relies on power and aggression rather than technique and footwork.

Judo, has no strikes and is mostly throws – I think we can see the risk in that when it comes to real-life application. Kung Fu will take an unnecessary amount of time to become proficient and not have to think about what comes next in your one move to incapacitate your opponent. Boxing was second best martial art to Muay Thai that I’ve trained in. Having your hands sharp can make you a force to be reckoned with, but the stance is heavy and sideways making you prone to leg kicks.

The lesson I learned through all of this? Stick to Muay Thai.

Muay Thai has made me a much more disciplined, assertive, and confident person overall. I have seen the young, the old, all different body types, men, and women train in this sport. It is the easiest and most devastating striking art to master. Strikes flow – you can hit from all angles and all distances. I sincerely believe everyone should be punched in the face once in their lives. It’s a very sobering and humbling experience. No matter how big you get in life, there’s someone out there that can kick your ass. I’m blessed to know that fact and my life has been better for it. It’s been seven years and counting that I’ve been at Warrior Way honing my craft and I could not imagine my life without it.

Without sharp, crisp boxing, your Muay Thai game will suffer.