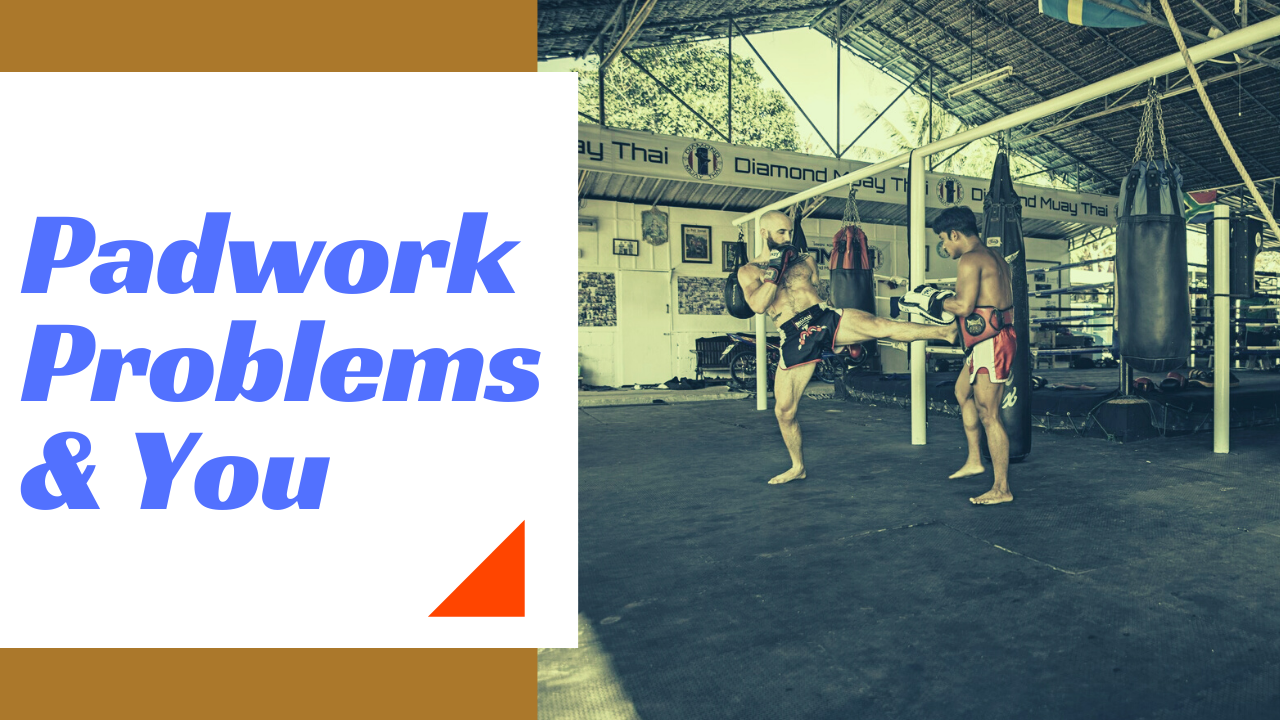 Hitting pads and putting in mitt work is one of the foundations of learning Muay Thai.

There is going to be a lot of both, and it won’t always be easy. It’s simple to see red and lose sight of the big picture when it comes to someone holding up a target (that’s literally red oftentimes).

Everyone can learn how to smash pads and finish up a combo sequence, but it’s smart delivery and good striking habits that separate novice from vet.

Here are the three common pitfalls beginners may be developing as they smash pads:

Most novices are all too eager to immediately throw a strike at any opening when an opportunity presents themselves.

Pad work drills can be like a quick game of rapid target acquisition for trigger-happy fighters (think pop-up targets at a shooting range). Unfortunately, this concept becomes the main concentration for many beginners during a session.

Herein lies the problem: the eyes have been conditioned to be so extremely focused on seeking out targets, footwork often becomes neglected.

Common occurrences of poor footwork will start to appear when any lateral movement is introduced into pad work drills. Beginners will start crossing their legs when jabbing or circling out. Many will also reset to a bladed sideways stance after throwing a rear roundhouse, leaving them completely unbalanced for the next strike.

Poor footwork will not only diminish the amount of force put into every strike, but will ultimately leave you in an extremely vulnerable position.

Power is issued from footwork and a strong base, so it is important to understand the movement made before each strike. Take note of the positioning of your feet during pad work. Always be cognizant of your own base during every combo.

This can be a bit of an afterthought for beginners since they’re typically preoccupied with just putting a fist or kick down field.

It’s hard to spot poor distance control. Since mitt work is set up in a safe environment, three or four combinations can be fired off in succession without any repercussions. The need to control how close an opponent gets to the beginner isn’t of much importance to them yet. Not until they start hitting harder, anyway.

Proper control and maintaining distance separates the work put in in a deeply technical training session from slapping the pads for points.

Punches like jabs or straights that meet the pads too close when beginners can’t find their range have a signature bend since the arms can’t fully extend in time. Pad work done too close usually looks like an all-out brawl, with bent arms against moving mitts coming in from every direction.

Just the opposite, pad work done too far away may look like a desperate lunge for a balloon floating off in the distance. Some beginners will completely dive at the mitts from five feet away only to hyperextend the arms or lose all the force at the end of the punch.

Controlling and maintaining distance will not only help with generating power, but it’s also the difference between throwing a punch and not getting hit immediately afterwards. There will always be an optimal range at the end of a punch or kick where it stings the most. Take the time to find that sweet spot characterized by that nice “crack” or slamming “thud” in the pads.

A lot of the pad work and drills in Muay Thai usually consist of high volume and chained combos.

Most of the combinations go far beyond the average 1-2-3 punches. Depending on the teacher, there are some sequences that go much further or include a reset to launch another long chain. Repeating such combinations will start to take their toll as the rounds go on — later rounds being the optimal time for old, bad habits to emerge.

It’s important to emphasize the need to stay in fighting stance no matter what the situation! Nothing dictates that each pad work combination must be done without pause over the course of 15 minutes.  And keep those hands up at all times to get into the habit of resting with a constant guard up while facing someone.

There is more to pad work than just hitting targets and memorizing combo sequences.  Instead of treating every pad session like a game of whack-a-mole, take the time to fine-tune the overall movement to deliver strikes towards the intended targets.

Be aware of these common pitfalls while hitting pads and prevent them from becoming bad habits.