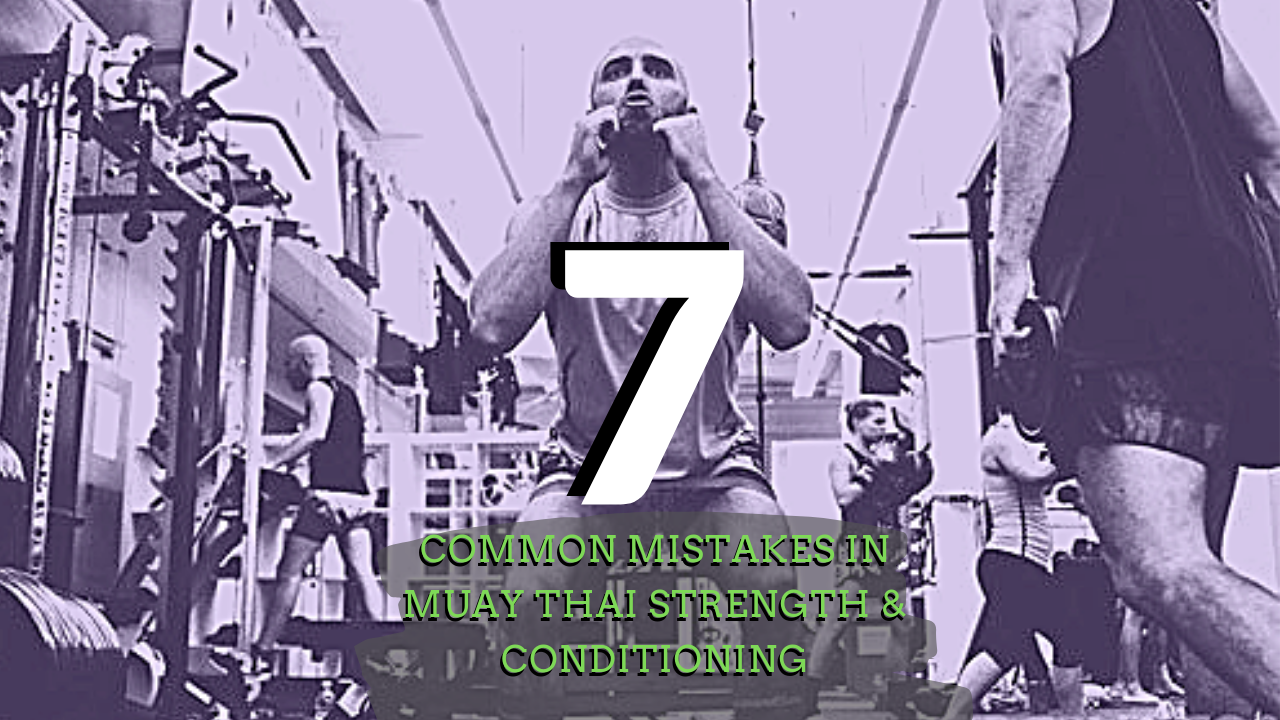 The combination of Muay Thai and strength and conditioning is now not only accepted, but actively sought by many competitive fighters and recreational Thai boxers alike.

This is great news. When I first started my website over five years ago, my emphasis was on why Thai boxers should be using strength and conditioning.

Now I enjoy explaining how you do this rather than justifying why – and that’s where things get exciting.

The enthusiasm the Muay Thai community now has for supplemental training has also led to some misconceptions. And in this article, I’ll highlight some of these so you can either steer-clear, or confirm you’re on the right track!

I get it. You love Muay Thai – I do too. But that doesn’t mean that allyour training sessions need to look like Muay Thai. In fact, you’ll run into problems if they do.

It’s true that resistance training must be Muay Thai specific to make you a better fighter. But that doesn’t mean you should load up skilled Muay Thai techniques and crank away, or only ever work for two or three minute rounds. Here are a few points for you to consider.

Firstly, loading up the actual skill you want to improve will change the skill. You start forming a different habit. In short, you’ll pollute your technique with altered movement mechanics that aren’t best when fighting using body weight alone.

Secondly, you must build from general movements and exercises to specific ones over your training program. This not only maximises the training effect, converting a better athletic foundation into improved performance, but also avoids overuse injuries and makes you peak for a fight.

Thirdly, strength and conditioning should bring about adaptations that you won’t get from Thai boxing alone, or there’s no point – you’d be better off practicing more Muay Thai! And that means providing a training stimulus that boosts Thai boxing performance without being the same.

Your supplemental training should target maximum strength, explosive power, speed, agility and power-endurance. Your energy systems ‘fitness’ conditioning must build aerobic capacity first and then shift to anaerobic lactic tolerance right before the fight. This requires a spectrum of training methods applied over your program. If all your training looks just like Muay Thai, that isn’t happening!

Varying training-routines too much or too little

Here I see both ends of the spectrum. Some fighters perform random ‘workouts of the day’, while others are using the same routine for years! Neither will get the most out of your fight engine.

Strength and conditioning coaches plan (periodise) their training into cycles or blocks of training that target specific qualities in a sequence. Each block typically lasts between 2-8 weeks to provide sufficient training stimulus for improved performance.

I find the sweet spot is about 4-weeks for fighters. That’s long enough to make your body adapt, but short enough to turn things around quick enough between fights – there’s no ‘off-season’ in Muay Thai.

Over those 4-weeks I vary the loads or sets, reps, and rest intervals used, but the exercises remain consistent to create sufficient overload. Change things too soon and your body won’t need to adapt (improve) to cope with it, whereas if you stick at it too long you’ll plateau and progress dries up.

Focusing on equipment or exercises rather than training-purpose

It’s easy to get caught up with the latest gym ‘toy’ or interesting exercise you’ve seen on YouTube. I see many fighters chucking in something they deem hard-core or fight-specific into their routines, without understanding what that exercise is doing.

For your training to be successful, every session needs a purpose. Basing your session around equipment or a specific exercise won’t cut it. Every piece of kit is a tool with job to do, use the right tool for the right job.

Equipment manufacturers promote videos of fighters using different pieces of equipment to inspire you to do the same. Not all I’ve seen in these videos is good practice, or even effective. Don’t jump on a bandwagon just because it’s been made fashionable through convincing marketing. 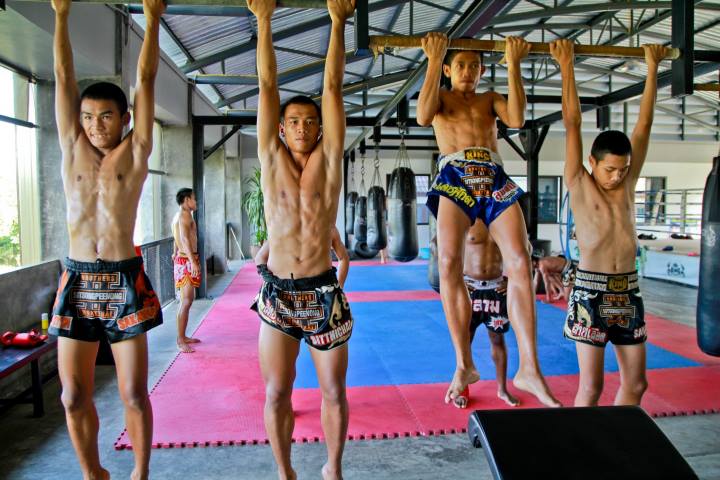 Not resting enough between exercise sets

Just because there’s ‘no rest for the wicked’ in Muay Thai, it doesn’t mean your supplemental training should be the same.

If you want to improve strength and power, you need generous rest intervals – about 3-5 minutes. And to a Thai boxer that’s eternity! Fighter’s often cut rest periods short or completely ignore them – and that’s a big mistake. You can’t get significantly stronger or more powerful training like that, it’s physiology.

Once you’ve developed greater strength and power, then you learn to endure it – and we begin reducing rest intervals. This transition happens over your training blocks, as you get closer to your fight.

In resistance training sessions, I like to superset three exercises together without rest. This makes productive
use of available training time, and works around our impatient fighter’s attitude.

These exercises are carefully chosen so they don’t compete with each other for recovery, and typically consist of two strength exercises and a mobility or corrective exercise.

This approach is a winner for fighters. By the time you’ve worked through all three exercises and taken a minutes rest, you’ve had about three minutes before repeating the first exercise again. That’s some high-quality training density right there.

Many fighters try to beat what they did last session, every session. That’s a great mind-set to have as a Thai boxer, but quickly leads to lack of progress or injury in your strength and conditioning.

In my 4-week training blocks I’ll structure a low week, a medium week, and a high week followed by a de-load week. It’s a case of repeatedly taking 3-steps forwards and 1-step back, to continually advance steadily upward – rather than taking 5-steps forward and getting stuck.

You get fitter and stronger in the rest periods between training sessions, not during the sessions themselves. The training itself breaks you down, reducing performance temporarily. It’s your body’s recovery in response to training that makes you better. Balancing training stimulus and recovery is the secret to improving athletic performance.

Believing overtraining is for wimps

Some see hard work as a badge of honour, and believe overtraining is an excuse for the lazy to quit. But the truth is overtraining is very real, and if you haven’t ever repeatedly trained harder than your capacity to recover, then you’ve never experienced it.

As soon as you start throwing in strength and power training into your Muay Thai training mix along with energy system conditioning sessions, your recovery systems are going to have a tougher time coping. Respect that, or learn the hard way. The more balls you attempt to juggle, the more likely you are to drop one… or the lot!

Recovery is king. If you don’t recover from your training, you’re not improving. It’s really as simple as that. Push this envelope too far and you’ll go beyond what S&C coaches call ‘overreaching’ (a short period of fatigue from which you’ll bounce back with extra fitness), into overtraining (a longer period of decreased performance, motivation and mental function, along with illness and injury that can take months to pull out of).

I see overtraining cropping up the most leading up to fights – Thai boxers misjudging the balance between the amount and intensity of training during the final push while cutting weight, and burning out just before the fight. 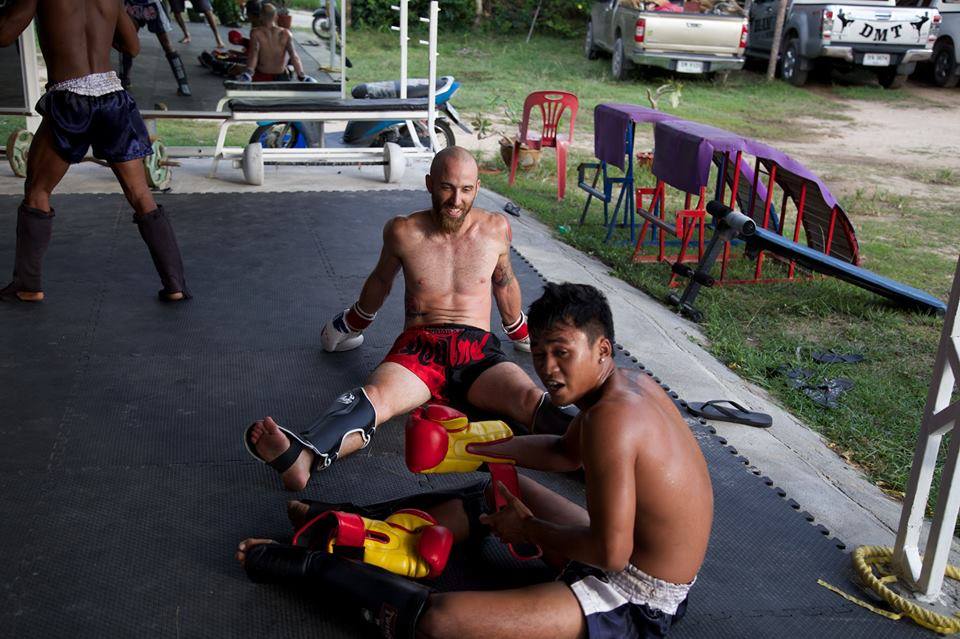 Not having a plan

As you’re probably realising, to make your training effective, you can’t just rock up to the gym and pluck a few exercises out of the air and crack on. That’s working out, not training.

Training has a purpose. And planned training has a shifting purpose over a period of time with a key ‘peak’ date. That’s how you continually move toward better and better performance while others go around in circles.

Begin building strength and aerobic capacity, then move onto a block converting this into explosive-power and aerobic-power, before squeezing this into speed and power-endurance just before your fight. Now that’s a plan!