How To Fight A Taller Opponent in Muay Thai 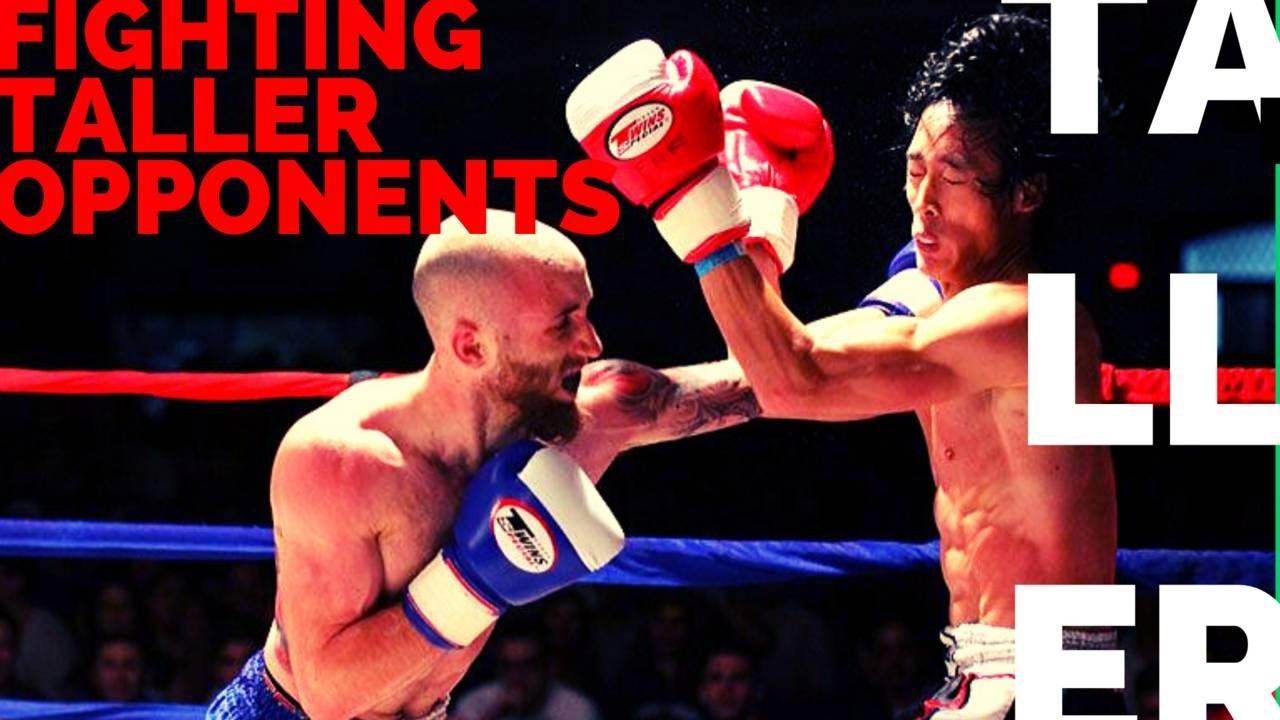 Fighting someone taller than you can be very frustrating, especially when you’re not sure what to do to negate the reach advantage your opponent has on you.

Getting jabbed in the nose or front kicked in the sternum is no fun, especially when you’re not able to return fire since you’re out of range.

Fortunately, throughout the history of Muay Thai and other combat sports, there has  been a ton of fights where we can learn a lot of strategies, tactics and techniques to overcome a height disadvantage.

There are a few key fight strategies to consider whenever dealing with a taller opponent.

Stay inside or outside your opponents range… not in the middle!

As the shorter fighter, you’re going to want to avoid the middle ground at all costs because that is the range where your opponent’s range will be most dangerous. Either stay on the outside where you can’t be reached or get in tight so you crowd your opponents strikes and make it difficult for him to extend his strikes and land any solid shots.

2) Use Footwork and Movement

Utilizing your footwork and lateral movement will usually be an effective strategy to use against a taller opponent.

In theory, you should be able to bounce in-and-out of striking range by using quick footwork so you can deliver strikes and avoid counters. Switching stances, moving laterally and circling out are just a few of the things you can do to create more opportunities for you to find an opening.

Head movement is key too especially if your opponent is sticking out the jab to keep you at bay. Be sure that you limit your head movement though because if you’re bobbing-and-weaving to get inside, your opponent may be able to time your weave with a kick right to the face.

Also, creating different angles to engage (and disengage) from will be crucial in landing powerful, effective strikes without taking much damage in return. However, chances are you will get hit at some point, so learning how to roll with the punches and learning how to counter off your opponents initial strike will be key.

Throw some bait out there for your opponent to bite on and see how he reacts. In an ideal situation you’ll have your opponent react to one of your feints and commit to throwing a heavy strike. Once they throw this strike (and miss) chances are that they will be off-balance and out of position to defend… which is perfect timing for you to attack.

This is another instance where having good footwork comes into play. If you’re able to shuffle your feet in-and-out of your opponents range and get them to react to one of your movements,  then you will have a prime opportunity to land strikes without taking much damage in return.

So, do you want to get inside range without taking any damage? Then get your opponent to commit and throw a strike!

Like I said, you will get hit at some point, so being able to wear a couple jabs to the face or teeps to the body is a tolerance that needs to be developed through training and conditioning.

Regardless whether you are fighting a taller opponent or not, taking a hit is a skill that you need to learn one way or another.

Fortunately, there are plenty of ways to develop the tolerance to take punches to the face or kicks to the body. If you haven’t already, try these sparring drills and tips to improve your chin and body conditioning.

5) Double Underhooks in the Clinch

Since you’ll be fighting on the inside, chances are you’ll find yourself clinching at one point or another during the fight.

Getting plum position on a taller opponent can be rather difficult, so learning how to utilize the double underhooks position will be key to your success on the inside.

It will also be important to learn proper defenses to the plum so you avoid getting kneed in the face or elbowed on the top of your skull, so make sure you watch some video tutorials on how to defend properly inside the clinch.

Since your opponent is taller his head is going to be further away and more difficult to hit. I’m not saying that you can’t hit a taller opponent in the head (your definitely can, ideally with an overhand right), what I’m saying is that you need to open up the opportunity for a head shot by working the body and legs.

By constantly changing levels and working all areas of the body, you’ll be able to create more openings, especially for the head shots. After pummeling the body with some hard punches or working the lead leg kick, your opponent may very well lower his guard to protect his body or even try to catch one of your low kicks… which will be a prime opportunity to attack the head!

7) Learn How To Counter “Long” Attacks

By “long” attacks I mean any attack that can be used from long distance. The main 2 that come to mind at the jab and the teep, but you also have to consider the length of your opponents cross and roundhouse kicks as well.

Learning how to defend and counter these “long” attacks will open up more opportunities for you to deal some serious damage to your opponent. Not to mention, once you start countering these attacks you can very easily demoralize your opponent and get him thinking twice about throwing them again!

Check out some of these video tutorials to counter these longer attacks:

One of the best things you can do to learn more about certain strategies, tactics and techniques used in Muay Thai is to watch and dissect certain fights and fighters. Watching and learning from past fights will give you a ton of useful things to work on during your next training or sparring session.

It can be hard dissecting Muay Thai fights, but fortunately we have guys like Lawrence Kenshin who have great eyes for analyzing Muay Thai strategies and techniques from past fights. Actually, Lawrence Kenshin just came out with this beautiful breakdown on how “Iron” Mike Zambidis has used certain techniques and tactics to knockout taller opponents.

This is definitely worth a watch… I picked up a handful of new techniques to try out!

Fighting a taller opponent is definitely a challenge, but if you learn and practice the right strategies and techniques you will be more than comfortable knowing how to deal with the reach disadvantage.

If you compete, there’s a good chance that you will eventually fight someone with a height and reach advantage on you (unless your a monster for your weight class). With that being said, it’s very, very important for you to learn, practice and perfect these certain techniques and strategies so you can dominate the next tall guy (or gal) you fight.