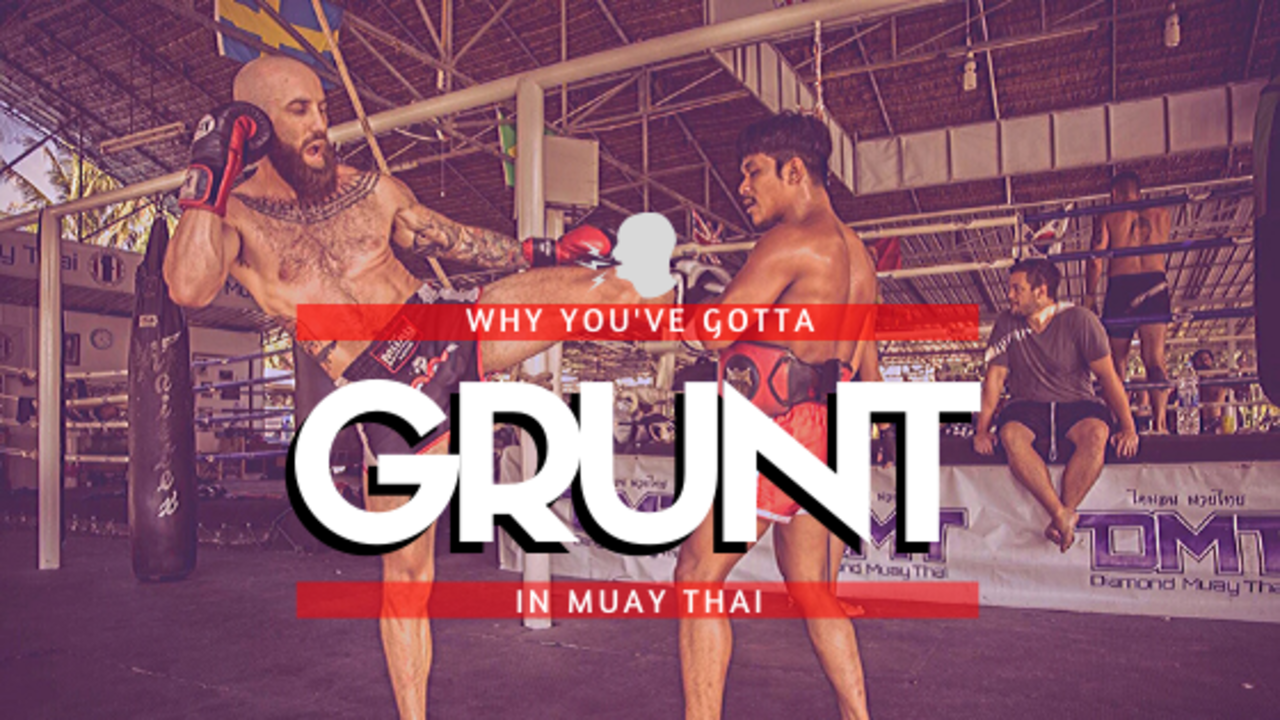 THE BENEFITS OF MAKING WEIRD SOUNDS WHEN YOU PUNCH & KICK SHIT

If you’ve been in a Muay Thai gym long enough, you’ll hear a variety of these sounds throughout your training sessions.

When I first trained Muay Thai in Thailand, one of the most noticeable differences between the common farang and the experienced Thai fighter was the fact that every single fighter who hit the heavy bag or banged the pads would make some kind of weird ass sound every time they threw a strike.

You’ve noticed this too, right?

Even if you train at a Western gym, there’s always that one guy who hits the bag and makes awkward high-pitched screams every time he throws a kick… now why would anyone ever do that?

At first, I thought that grunting during training was super annoying and weird. I guess it’s similar to the way I used to feel about the Thai music that played in the background during fights. At first I never understood it, but with time and experience, I learned that the music is deeply rooted in the tradition and culture of Muay Thai. Not only that, but the music also plays a HUGE role in the rhythm and overall tempo and speed of the fight.

Well, similarly to how I initially felt about the Thai music, I also felt that grunting was stupid and annoying as fuck, especially when someone would dramatically over-embellish their sounds and make a point to yell as loud as they can every single time they throw a punch (even if it’s a wimpy, half-ass punch).

I remember telling myself I’d never be that asshole who’d be grunting and making strange, loud sounds when I trained… but you know what? I’m definitely that asshole now.

So what changed my mind about grunting? Well, there’s a few things:

Why You Should Grunt When Striking

1) The Scientific Benefits Of Grunting

Yes, there are actually scientific studies done showing that grunting while performing an exercise can increase your output by 10%…. 10%!!!! I don’t know about you, but 10% is a lot when it comes to the amount of power in a punch, kick, knee or elbow, don’t you think?

There are a lot of explanations and hypothesis’ to why this is true, but the general consensus is that when yelling or grunting, you activate the autonomic nervous system that controls the fight or flight response – which is similar to an adrenaline rush where your muscle contractions are more complete and forceful. The rapid exhalation tightens your core muscles and helps your body move as one unit much more efficiently.

(For the complete article on the scientific benefits of grunting, click here)

We all know that it’s beneficial (and proper technique) to be exhaling as you throw any type of strike. Like grunting (which is a form of exhaling), breathing out as you throw a technique helps increase the force behind the strike.

Another reason grunting while striking is beneficial is because you become more conscious about your breathing. Think about it this way – if you hear yourself yelling and screaming, you are absolutely certain that you are exhaling when you should be. Whereas if you don’t make an effort to grunt as you exhale, it’s much easier to forget to breathe and control your breathing.

As you exhale (or grunt in this case) your body rushes oxygen into your respiratory system for absorption. When your body gets more oxygen, your muscles are able perform more efficiently and produce more power with all your strikes.

Not only does the oxygen help with your power and explosiveness, but it also helps with your endurance and stamina since you’ll be sending more oxygen to your lungs and respiratory system.

Other Things To Consider When Grunting In Muay Thai

Although exhaling and grunting are beneficial to your breathing, endurance and overall power output, there are other aspects of grunting that you should consider.

First and foremost, one of the things I learned while training at Duane “Bang” Ludwig’s gym in Colorado was to exhale while simultaneously biting down on your mouth guard. It’s super easy to forget to bite down on your mouth guard when you are concentrating so much on exhaling. If your jaw is open while throwing a strike, you are much more susceptible to being hurt from a counter strike.

Another thing to consider is the actual noise you make when you exhale.

This can be a tricky thing because everyone is unique and everyone is going to be making different sounds as they kick the bag. With that being said, it will take time to create your personal grunting sound that works best for you, so feel free to experiment with every type of grunt you’ve heard. Keep in mind that you want a sound that allows a big exhale while at the same time keeps your mouth biting down on your mouth guard.

Lastly, if you haven’t grunted before or always been skeptical about making sounds when you train Muay Thai… get over it!

Like seriously, you’ll have 10% more power, have more control of your breathing, increase your stamina and get into a better rhythm with your striking.

If you’re worried about how you might sound or that other people might think you sound like a douche, get over it! This is especially the case if you compete and want to perform at the highest levels, because that 10% power increase in your strikes and better oxygen consumption can play a HUGE role in the context of a fight.