How To Defeat An Experienced Opponent: Kevin Ross vs. Malaipet Breakdown- Part 1 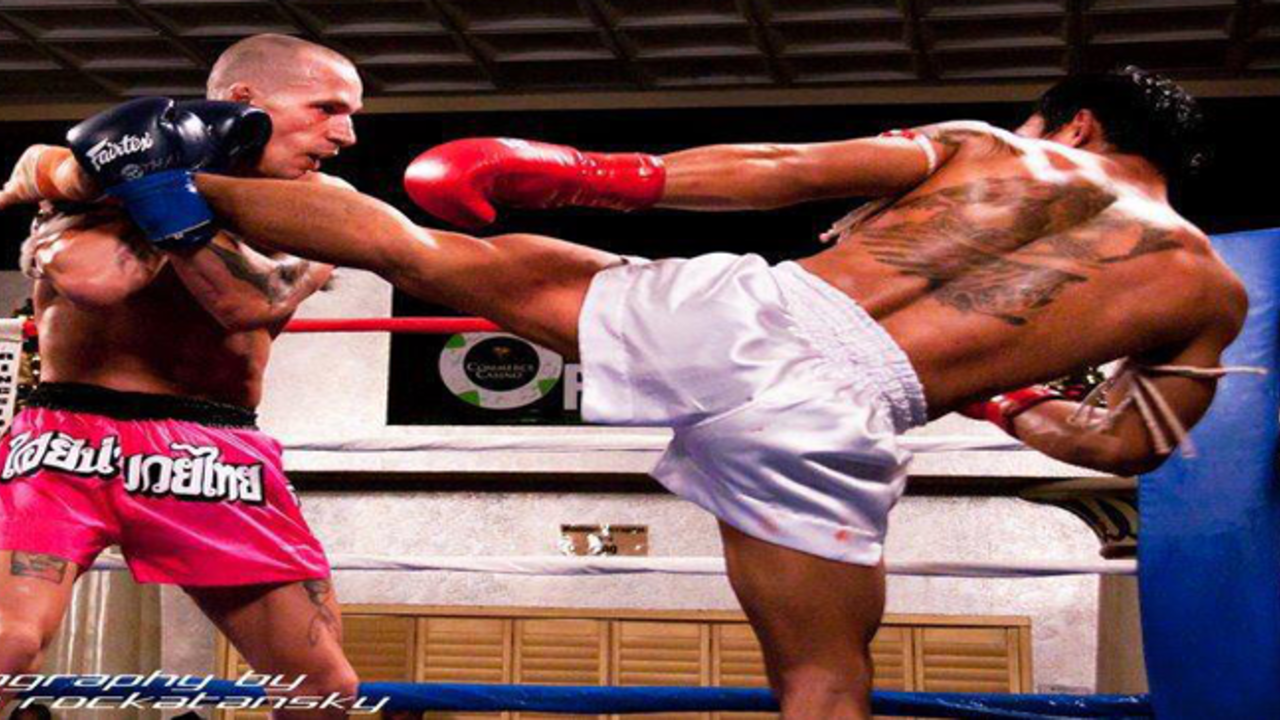 The following post on how to defeat a more experienced opponent is written by Jon from MuayThaiAnalyst.com. If you enjoy this breakdown and analysis of Kevin Ross vs. Malaipet, you’ll definitely enjoy the rest of Jon’s work on his website. But for now, check out part 1 of this 3-part series on “Why Malaipet Couldn’t Stop Crazy”.

Kevin Ross is a pioneer in American Muay Thai and one of the most accomplished US fighters today. He was voted Muay Thai North American Fighter of the year in 2010 and has held titles from the WBC, USMF and Lion Fight.  Kevin has also fought a number former Thai champions including Saenchai, Sagetdao, Coke Chunhawat and Malaipet.

Ross and Malaipet met on Dec 5, 2010 at the Commerce Casino In Los Angeles. Malaipet Sasiprapa is a former Rajadamnern and WBC champion.  This was a tall order for Ross as Malaipet usually fought two weight classes above him and had almost 200 more fights than him.  Despite this, he was able to earn a clear unanimous decision (49-45, 50-45, and 50-45) against this tough Thai veteran.

Ross put together a great game plan for defeating a larger, more experienced and more explosive opponent based on (i) solid defense, (ii) constant pressure and (iii) multidimensional offense.

This the first of a three part series where we begin by exploring Ross’ defensive tactics and strategies during the match.

“Invincibility lies in the defense; the possibility of victory in the attack.” – Sun Tzu

In a post fight interview,  Kevin notes that if Malaipet can back you up or intimidate you, he’ll “run right over you,” but people who “stand their ground” and take it to him do well.  Ross’ defensive success is attributable to good fundamentals, great ring vision, and ability to keep his composure throughout the fight.

The foundation of a solid defense begins with a high guard, balanced fighting stance, and consistently blocking your opponent’s attacks.  In the interview, Ross also noted he could see Malaipet fade around the end of 2nd round, but knew he was still dangerous regardless.  Ross maintained a strong defensive focus into later rounds.  As a result, Malaipet wasn’t able to land many clean, unanswered shots during the entire fight.

You will notice that Ross stays relaxed checking kicks and blocking punches while keeping his gaze on Malaipet.  Novices tend to tense their body when blocking, slowing down the movement and breaking their posture.  Some also look away from their opponent making them blind to subsequent attacks.

In another post fight interview, Ross said he could see Malaipet’s kicks coming but they were quick.  Malaipet’s techniques are smooth and fluid.  At times, he uses a broken rhythm to make his strikes less predictable and more difficult to defend.

Ross was able to pick up on the subtle cues which precede each technique and was able to defend accordingly.  This advanced pattern recognition is developed and ingrained through innumerable rounds of sparring and pad work.  Through practice, it can become automatic and you begin to check kicks and block punches without thinking about it.

Ross is also able to adeptly discern committed attacks from feints.  He uses this to thwart Malaipet’s traps and fire off quick counters.  On a couple occasions, Malaipet tries to sweep Ross by faking a right low kick.  If Kevin raises his left leg to block, Malaipet’s right foot would have slipped under and kicked out Ross’ right leg to send him crashing forward.  Ross makes a split second judgement that Malaipet is overselling the leg kick.  His exaggerated movements most likely indicates he is looking to do something other than a leg kick.  Ross keeps his left leg planted and catches Malaipet with a counter right hook.

Malaipet attempts the sweep for a second time in round 3 from closer range but is also stuffed and countered.

“In battle, if you you make your opponent flinch, you have already won” – Miyamoto Musashi, A Book of Five Rings

Even when Malaipet is able to successfully sell a feint, Ross doesn’t miss a beat and proceeds to throw his counter.  Here, Malaipet feints a switch kick and Ross raises left knee to cross block.  Although Malaipet doesn’t fire it, Ross transitions right into a rear teep.  Being overly concerned with your opponent’s actions may allow him to dictate the pace of the fight.  By countering regardless of whether it is feint or a committed attack, Ross doesn’t let Malaipet force him in a reactive mode and take control of the fight.

Ross maintains a stoic demeanor throughout the fight.  He refuses to show he is hurt when hit or frustrated when swept.  A fight is both a physical and mental contest.  It might seem like bravado to a casual observer, but you can dishearten and discourage your opponent by simply standing your ground and shrugging off his best attacks.

At the end of round 2, Ross interrupts Malaipet’s left hook with a counter switch kick.  Malaipet manages to catch the leg, turn Ross to the side and score a spectacular sweep.  Ross throws up his hands like nothing’s happened.

If you hit an opponent with a solid strike, it is fairly likely he will try to come back at you with the same technique right away.  From a scoring perspective, it’s important to regain the lost points.  But beyond that, there is an innate human urge to get even. “An eye for an eye” so to speak.  Ross understands this well, anticipates Malaipet’s next moves and defends and counters accordingly.

A Knee for a Knee

Here, Ross moves forward and raises his hands to draw out Malaipet’s guard.  He secures double collar ties and pulls Malaipet into a beautiful straight left knee.  Moments later, Malaipet steps forward with a straight left knee of his own.  Ross anticipates this and executes a diagonal knee followed by a short right straight over the top. The angle of this diagonal knee gives Ross a little more range than a straight knee.  This allows him to make contact with Malaipet’s stomach while keeping his body out of harm’s way.

A Shin for a Shin

Here, Malaipet tries to move forward with left hook but Ross interrupts this with nice switch kick.  Predictably, Malaipet retaliates with switch kick of his own.  Ross takes it on his gloves and fires a low kick to Malaipet’s supporting left leg.

A Sweep for a Sweep

About 2 minutes into round 4, Ross executes a beautiful sweep for a big score.  Some sweeps may injure a fighter’s pride more than his body.  Falling flat with your opponent standing over you can anger certain fighters and make them lose their cool.

Moments later, Malaipet attempts the same sweep.  Ross anticipates this and keeps his feet grounded.  He ducks under Malaipet’s right arm and pushes forward to dump Malaipet to the canvas for another big score.

Part 2 of this series on Kevin Ross’ constant pressure will be coming shortly.

If you enjoyed this article, please have a look at muaythaianalyst.com for more in depth fight analysis and technique break downs.