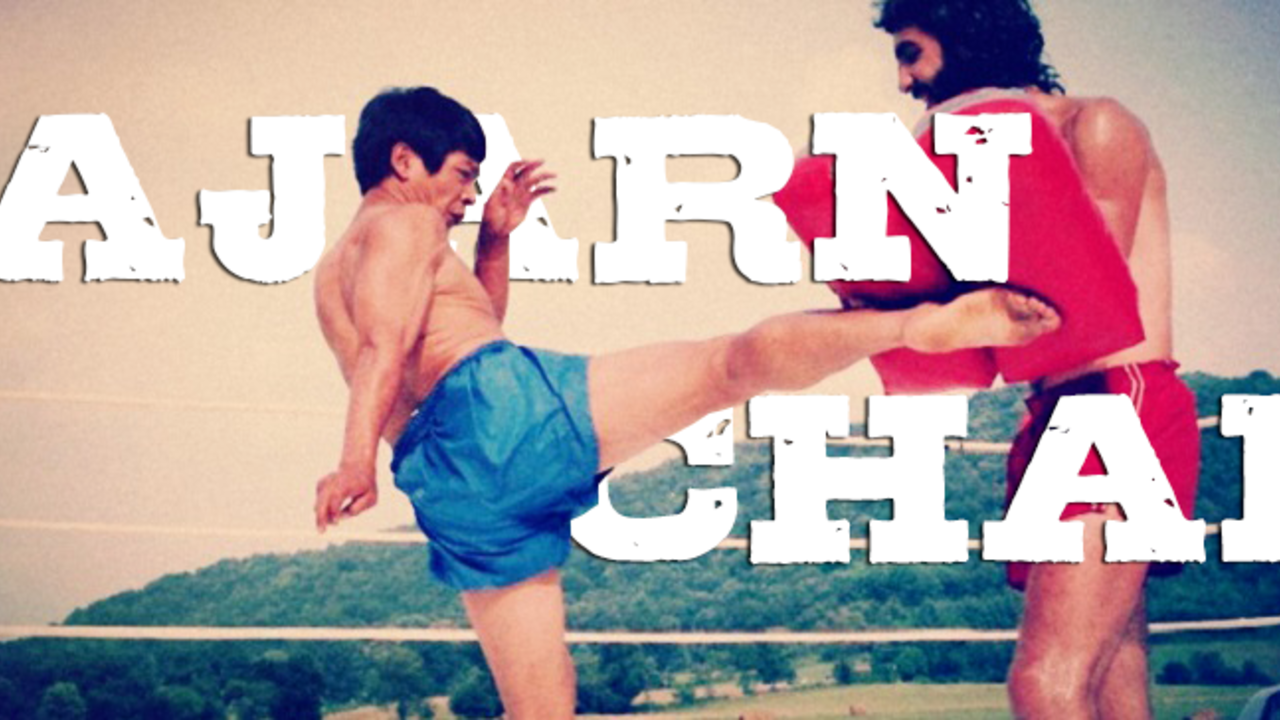 By Kyle Gilmore | All images courtesy of Ajarn Chai

Muay Thai as a physical craft is an amazing exploration into the things of which your body is capable. No one embodies that exploration better than the living legend that is Ajarn Chai.

Ajarn Chai brought Muay Thai to the United States in 1968, spreading his knowledge of “the Art of Eight Limbs” by developing the Thai Boxing Association. This year marks fifty years that he has been teaching his craft.

If you have practiced the art of Muay Thai in the United States, you undoubtedly know Ajarn Chai. If you don’t or haven’t, you should.

The master himself sat down with Muay Thai Guy for a chat about his life, his style and his vision for the future of Muay Thai on a global scale.

(Co-written by Monica Gilmore. Special thanks for Rachel Ramirez.)

Born Surachai Sirisute on October 16, 1948 in Bangkok, Thailand, Ajarn Chai took up Thailand’s national sport at the tender age of four. His father had a love for Muay Thai, which trickled down to the future master as a young boy. Luckily for Surachai (and for all future nak muay), there was a Muay Thai gym right next to the Sirisute home. Singpravach was run by Ajarn Suwan, a close associate of Sirisute’s father.

“Ajarn Suwan and my dad sometimes get together,” Sirisute recalls. “Sometimes [they’d] sit down and have dinner together, and he said, ‘you know, you have a son, you should work with him on the Muay Thai.’”

Sirisute’s father took the suggestion to heart, hanging a small heavy bag for the young Surachai to kick. “I just started to get into it,” he says.

Sirisute had his first ring fight at twelve years old, when Ajarn Suwan enrolled him in a fight at a local fair.  The fight fueled Sirisute’s interest even further, and he began to train every day after school. Training became a habit, and if he missed a day, he felt a void.

Training for himself progressed into teaching others. Sirisute recalls how it all began. “The first time when I started to teach, I remember it just a small Shotokan studio in Santa Monica.”  Sirisute moved on to teaching at colleges and YMCAs, developing his instructional method as his classes (and legend) grew.

Sirisute utilizes the “one-step-at-a-time” approach to teaching. (“You teach the student to read a-b-c-d-e-f… It’s the same in the martial arts.”) Sirisute also draws on his own love of the sport in teaching others.

Simply put: anyone can be a great fighter if he or she puts in the time, training and heart that the sport deserves. Teaching is the same. Sirisute credits his father and uncle with instilling in him these qualities, as his uncle was a big supporter of teaching Muay Thai to foreigners—spreading the craft, as it were.

His uncle’s influence led to Sirisute’s well-known position on training: go to various camps, with different people, and learn different techniques. Sirisute is also known for including elements of boxing in his curriculum. He attempted to spread this method to other countries in the early 70s with disappointing results.

Times have changed, thanks to Sirisute’s efforts.

Sirisute acknowledges that being a fighter does not always transition smoothly into being a coach.  “I see a lot of champ from Thailand come to the States and [they] cannot teach it.”

The Thai master recalls teaching a seminar with the legendary Bunkerd Fairtex. “First thing Bunkerd come up to me and say, ‘I don’t know how to teach.’ I told him, ‘you got to start with them step-by-step.’”

Sirisute has taught fighters, professional athletes and actors over his lengthy career. He explains that Muay Thai is complementary to other physical activities. Sirisute uses professional football as an example. While helping train Dallas Cowboys football team with conditioning coach Bob Ward and head coach Tom Landry, the players had a Muay Thai-style wake-up call.

“I worked them over there and let them kick the pad, not [more] than three minutes”. The football players, including quarterback Danny White, developed a new physical awareness. Sirisute is mildly sympathetic to their plight, stating “you learn everything about your body” when practicing Muay Thai.  Although he worked with everyone on the team, it was defensive tackle Randy White (#54) who showed more spirit, worked harder, and had more passion for Muay Thai than any of his teammates.

Sirisute is a big supporter of Thai customs and culture through his curriculum, as well as discipline and respect. However, he acknowledges that learning to teach Muay Thai is made more difficult by a culture shock many fighters experience upon coming to the US. Sirisute explains that blending into a new and different society is a must. His own ability to balance the appropriate amount of Thailand to inject into a given situation is what has allowed Sirisute to grow the Thai Boxing Association (often referred to as the TBA) into the World Thai Boxing Association.

His vision for the future of his association is a continued quest for growth of Muay Thai, plus a desire that it will reach new elevations. Specifically?  “My goal is to see the Thai Boxing in the Olympics.”

Sirisute notes that there have been many great fighters in Thailand that never got the opportunity to fight outside of the country, never had the chance to make a name for themselves. After teaching Muay Thai for fifty years, how does Sirisute stay motivated to continue spreading the craft of Muay Thai?

“I think it the students allow me to keep going, because it take for a while to get to know all the student… After some student set up the seminar for me for over thirty years and I always stay with them, and then I always, that make me keep going. It’s the students – yes.”

4 Reasons Muay Thai Is So Good For Core Body Strength
This Is How To Silence Your Inner Critic
HIIT: This is Next-Gen Training for Muay Thai