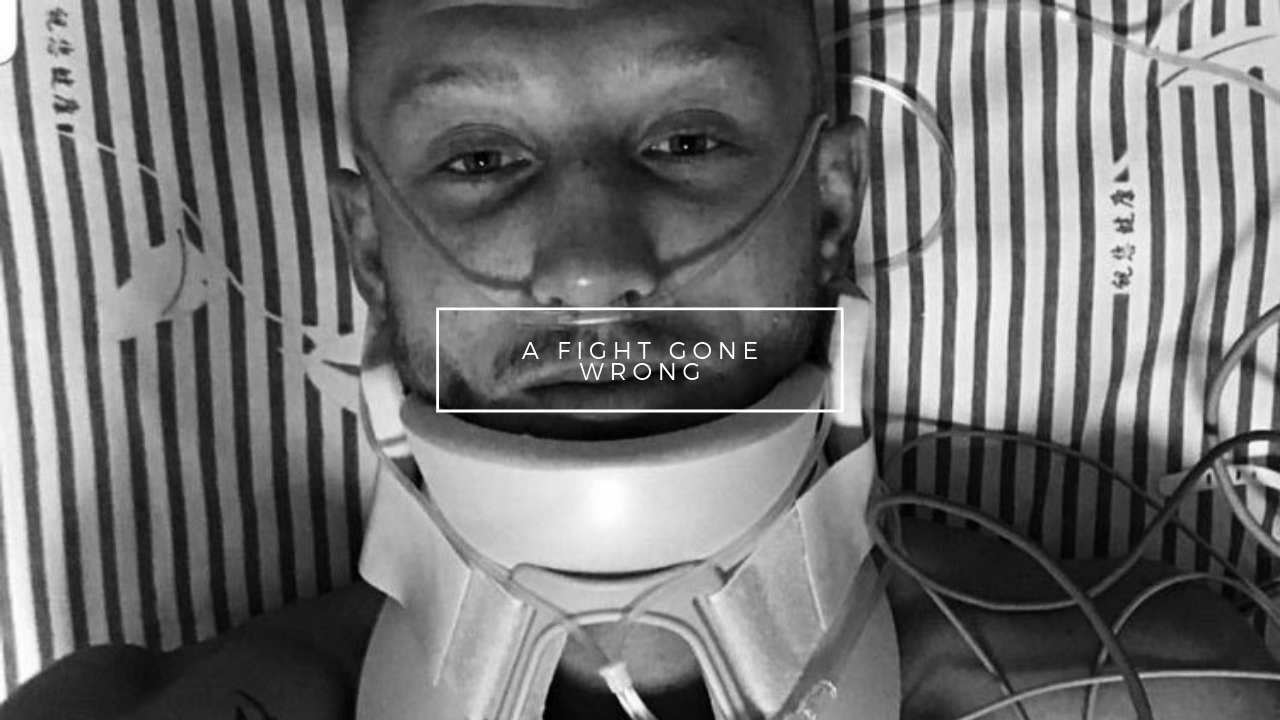 On October 20th, Muay Thai champion Pascal Schroth stepped into a ring in China to defend his K1 title under what he believed to be regular kickboxing rules. For the 25 year-old veteran, this bout was just another day at the office.

His opponent, Quinghao Meng from Taicang China, was just another body in front of Pascal’s ascent to superstardom. As a matter of fact, Schroth’s confidence was pretty high because he had already beaten Meng the year before. But on that Saturday night in China, shady promoters, the language barrier, and a general atmosphere of confusion colluded to ensure that Scroth never made it out of that ring on his own two feet.

First, let’s look at a timeline of the events that led up to the October 20th rematch:

On Monday the 22th, Schroth returns to Phuket Thailand where he is properly diagnosed: his C5 vertebrae is broken. Schroth now faces down a long, complex recovery. Muay Thai Guy talks to Schroth about the fight, his injury, and what’s next.

SCHROTH AND WENG TWO DAYS BEFORE THE FIGHT. (COURTESY OF PASCAL SCHROTH ON FACEBOOK)

MTG: How are you, Pascal?

MTG: Can you take us through what happened on October 20?

PR: I flew to China to fight Meng, someone I had beaten the year before. I was supposed to be the seventh fight of the evening. I get ready to go backstage, but the fight that was actually scheduled after mine was pushed before mine without my knowledge. So I just waited for a bit. That fight was an MMA fight.

So after waiting for a little while, I went backstage with my coach. Around the same time, my opponent arrived. I noticed that he had both his knees and right shin taped. I wondered why. They announced me first into the ring. It was nothing unusual, just a quick announcement and walk in. Meng was then announced and he entered the stage with a group of dancers and fireworks. He was the favorite of the event. That was clear. I actually did not know this before, but it turns out the event was held in Taicang City, where Qinghao Meng is from.

In the ring, the referee told us not to throw elbows and no knee strikes to the head. That was confusing, as under K1 rules knees to the head are allowed. Everything leading up to this moment was already confusing, [but] now it was time to fight. You can imagine the stress that was already leading up to this moment of the actual fight. But I stayed focused and was just going to fight a K1 fight. That’s what I do and that’s what I agreed to fight.

The fight starts. We touch gloves. I throw the first punch. I switched my stance and I got him straight in the face with my left. He push-kicked me away and threw boxing combinations which I blocked.

We end up in close range. I kneed him to the body with my right and then felt him wrap his arms around my waist. I tried to push me weight back but he adjusted his grip. At this point, I really didn’t understand what was going on. I thought, “what is he doing and why is the referee not breaking us apart?’ He then suddenly picks me up and slams me to the ground head-first.

It happened fast. I saw my own feet in the air with all the bright lights above. When I landed, I could feel and hear the crack in my neck, and I was in immediate pain. Next, I see the referee standing over me and giving me the count. I see a glimpse of my opponent celebrating in his corner. I desperately tried to stand up but it was impossible, as I couldn’t lift my head. I realized I was injured. I was in incredible pain but kept trying to get up. There was nothing I wanted more than to just simply stand up. They place a neck supporter on me, put me on some kind of a gurney, and carried me out of the ring. I didn’t realize what was happening; this all happened very fast. They put me in an ambulance and brought me to a hospital.

MTG: How did this fight come about?

PR: I was offered to fight for the organization WLK on Saturday 20th of October in Taicang City, China. The fight was set to be under K1 rules: three rounds, three minutes in the 70 kg weight category. The fight was against the Chinese fighter Qinghao Meng whom I had fought before making this rematch. We fought before at GLORY 46 in October 2017. I beat Meng by points. This fight was confirmed on the fifth of September 2018. On the 11th of October, WLK sends me a message asking if I had ever fought a “Sanda fight” before. I answer them no, I was not familiar with that fight style. I tell WLK that I only fight K1. I then get the reply: “yeah, sure, same K1, but 70 kg no more.” And that was the end of that discussion. That was the only conversation we ever had about the rules of the fight.

MTG: What did they tell you at the hospital?

PR: At the hospital, I didn’t understand a thing. No one spoke English. They tried to calm me down, but not knowing anything at all is not very comforting or relaxing. I asked for a phone so I could contact my girlfriend in Phuket and let her know what happened. I wasn’t sure if anyone would take care of letting my people know, and I knew my family and friends must have been watching the fight. I sent her a text from someone’s Instagram account. In my text, I told my girlfriend that I was in the hospital but that I was OK. I knew she would take care of letting my family know.

SCHROTH A FEW DAYS AFTER ENDURING HIS INJURY. (COURTESY OF PASCAL SCHROTH ON FACEBOOK)

MTG: What happened after that?

PR: They wheeled me in for an X-ray. They then wheeled me back into the waiting area. There were maybe six or eight people in that area. I was laying flat on the gurney, unable to move, so my view was the ceiling and the top of people’s heads.

This was a hectic environment. I had no understanding of anything. I tried to read all the signs hanging in the ceilings to understand where I was going as they wheeled me from one place to another. Then I heard someone say the word “broken.” I repeatedly asked into the crowd, “What is broken? Is my neck broken?” Then someone came up to me and said, “Yes, your neck is broken.”

MTG: That must have been a hard pill to swallow.

PR: Since I was a kid, I remember always thinking if you break your neck, you’re dead. My grandmother broke her neck and passed away. Of course, there are different levels of the injury of a broken neck. I wanted to understand my injury. At this moment, the only thing I was sure of is that I would have to take a long break from my career. I started to feel emotional.

MTG: Do you feel that this was an accident or do you feel it was intentional?

PR: It was intentional. I had beaten Meng before. This was not a rematch; it was a revenge.

MTG: Has the promotion compensated you for your injuries. Have they taken care of you financially?

PR: Ha… The promoter asked me what I wanted. Again, I still had not realized this was even happening. I didn’t have the full understanding of this whole thing. I didn’t know how long I would have to recover, I didn’t know when I would fight again, but I realized that all of my plans for this year at least had to be cancelled. I felt very uncomfortable making this negation as I just didn’t know enough of my own condition. But knowing the loss of income for the next few months, I decide to ask for 15000 yuan (around $2000 US) per month for six months. I also asked for my opponent’s fight purse along with my own and for them to cover my future medical and rehab bills.

Someone translated my request and it seemed to upset the promoter. WLK’s counter offer was 5000 yuan ($700 USD) per month for three months. I refused their counter offer. They then started to argue among themselves again. I didn’t understand a thing. I told the representative for the promotion that my request was not a lot to ask for. They finally offered me 50000 yuan, which is about $7200 US in cash right then and there. It didn’t feel right, but it was the best thing I could get. I accepted the money.

MTG: Are you in pain?

PR: Luckily there is no pain, but it is very uncomfortable. The brace digs in my back and I’m limited. I can’t sleep, I can’t move… I can move my arms and my legs, but I cannot turn my head left or right nor can I move it up or down.

MTG: What do you see as your next steps?

PR: Now I just want to recover, but as you can imagine this situation is very stressful. There are a lot of things going on that I cannot talk about due to legal matters. I want WLK to pay for my rehabilitation and medical bills. It’s the right thing to do.

MTG: What would you tell other fighters to do in this situation?

PR: I know as fighters that all we want to do is fight and that sometimes we take bad fights or bad deals because we feel we have no choice. But there is always a choice. Make sure you know the rules and make sure you fight for good promotions.

MTG: Are you considering fighting again once you recover?

PR: Of course. My doctor in Phuket told me that there are two types of people. The first is a person who gets angry and lets a situation like this scare them. They get traumatized and they never want to do anything anymore. The other type of person is the one doesn’t let an injury interfere with their goals.

I fall into the second category. I am a fighter, and this is just another fight. I will be back stronger than ever.