Muay Thai Kicks: Everything You Need To Know 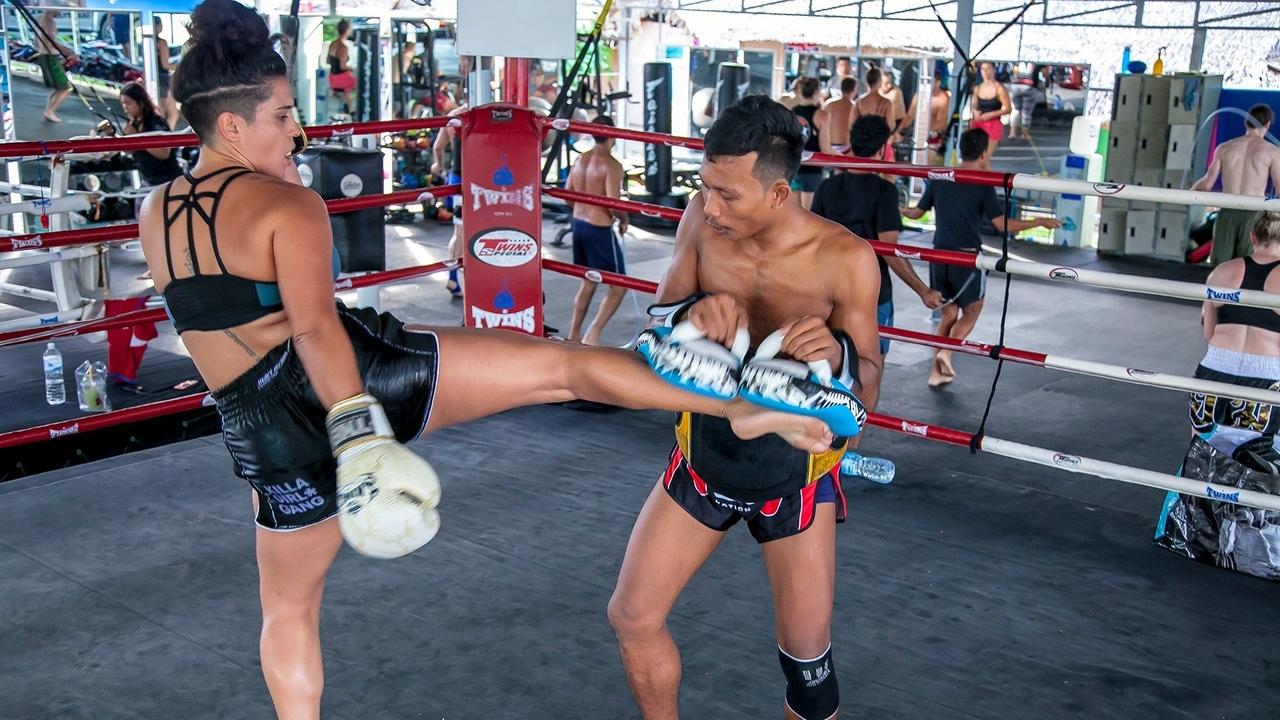 It’s true that Muay Thai is often uniquely referred to as the “Art of Eight Limbs” because of its combined use of additional contact points. However, this does not mean all limbs will be emphasized right out of the gate. Everyone has to crawl before they walk. But even as a budding beginner with only the bare essentials, the persistent use of them will ultimately identify you as a Muay Thai practitioner.

Today, we aim to focus on understanding the basic kicks that are heavily used in Muay Thai at all stages and provide additional methods to develop them.

Keep in mind that there are no super-secret techniques to be learned here — only slight variations to the basics that were emphasized from inception and practiced nonstop every day.

If you seek BONE-CRUSHING kicking power, or SHINS OF STEEL, or you just want to MASTER kicking for Muay Thai… This comprehensive set of tutorials, breakdowns & drills is for YOU!

Whether orthodox or southpaw, the two distinctive hallmark Muay Thai kicks that you will be taking advantage throughout your whole career will be the teep and the roundhouse.

Some Muay Thai fights are built around just showcasing these two kicks as their bread and butter. These are the same teep and roundhouse kicks that are taught right out of the gate as a beginner and repeatedly drilled no matter the experience level.

Let’s examine the two kicks and take a look at the various functions they serve.

Though not a staple of every nak muay’s arsenal, the question mark kick is without a doubt a devastating and mystifying strike that has collected KOs across the globe.

A teep functions similarly to a boxing jab (it is aptly named the foot jab for a reason) only the leg tends to cover longer amount of distance. Many nak muays will exploit the teep several times throughout the fight to:

Defensively utilizing the teep means controlling the distance between two fighters. Just the opposite, offensive utilization of the teep means taking the wind out of the opponent and sending them to the canvas unbalanced. A well-established teep will offer the best of both worlds.

The teep ultimately picks aggressive fighters apart by making them re-evaluate their angles of approach in frustration over the course of the fight. Combined with its quick startup and recovery, it’s no coincidence that this kick is a staple to every Muay Thai fight.

The teep is most effective when stopping aggression dead in its tracks. A forward-moving boxer, for instance, will think twice about stepping in after getting teeped in the gut!

OUTWIT PUNCHERS WITH THE TEEP

The teep or “foot jab” is one of the most common techniques utilized in Muay Thai. The kick itself is executed by pushing up on a posting foot, bringing the kicking knee up to chest height, and driving the kick out using the forward extension of the hips. The result is a quick push kick down the centerline into the body.

The Muay Thai roundhouse is the proverbial “swinging baseball bat” for which the sport is notorious. When Muay Thai comes up in conversation, it’s these devastatingly heavy kicks that spring into mind. It is one of the flashiest techniques exercised regularly by nak muay at all levels.

The kick itself is a wondrous application of explosive energy created by the human body. The Muay Thai roundhouse starts by pushing up on the ball of the post foot, torqueing the hips by turning them over, swinging the extended kicking leg (shin out) in an arcing trajectory while pivoting on the posted foot, and following completely through. The end result is a destructive kick that essentially slams the shin into the intended appendage.

How NOT To Throw A Roundhouse Kick

Take to the skies with this dynamic jumping roundhouse kick. Surprise your opponents with this flashy technique that they never saw coming.

There are two objectives in a fight: win by points or cause as much damage as possible. The Muay Thai roundhouse conveniently does both, which makes it the go to weapon for all nak muays out there.

Muay Thai fighters drill the roundhouse day in and day out, incorporating this kick into their routines and setups. So it is no surprise that when a roundhouse lands, you definitely don’t want to be on the receiving end. Even blocking multiple kicks with the forearms isn’t suggested since several Muay Thai roundhouses will inevitably leave marks of their power.
The sheer force of the kick alone is enough for an opponent to stop and lose their positioning (an important criterion in Muay Thai scoring). If opponent fails to read or block a perfectly executed Muay Thai roundhouse towards the head, it’s going to put their lights out.

Sick of looking but never finding openings for head kicks? Create them yourself, at will. Here are three tricky setups to score the roundhouse kick to the head knockout.

Progressing through daily padwork sessions often has you throwing several roundhouses and teeps over the course of 90 minutes. You may feel that your teep and roundhouse are adequate after doing the same thing day in and day out. However, it’s easy to fall into a loop of complacency when doing repetitious motions over a long period of time.

Here are some of the totally essential, often neglected methods of kick development that the best nak muay use religiously to perfect their kicks.

“A large majority of explosive power goes untapped without stretching.”

There is no kicking without a certain degree of flexibility. A large majority of explosive power goes untapped without stretching. If the hamstrings are stiff and the groin is too tight, good luck getting your legs high for a head kick. Develop flexibility for these kicks by dedicating 5-10 minutes for these stretches before (and after) class.

GROIN STRETCH – Sit on your butt and spread your legs into a wide V-shape. Keep the back straight, legs still, and try to extend your arms out in front of you as far as they can go.

This stretch will help activate the hips and achieve the fluid ability to vary the height differences on your Muay Thai roundhouse for the ultimate head kick KO.

HAMSTRING STRETCH – Stand with your feet together. Keep your weight on the balls of your feet and lean down to touch your toes. Do not bend the knees.

The hamstring stretch helps straighten and fully extend the leg for that spearing teep that covers longer distances.

The number one reason to stretch in Muay Thai is to prevent injuries. If you can’t fight come fight night, what’s the point of training, anyway?

After your session ends, head on over to the heavy bag to work on your roundhouse. Dedicate the last 50 roundhouse kicks to developing technique and power for both legs. Angle out with that posting leg, drive up on the balls of your foot, pivot, activate the hips, and drive the shin into the bag as if you are trying to kick through it.

There is no need to roll the shins with iron bars or head out into the wilderness to hack down banana trees to condition the shin. Well, you can if you want, but consistently working the heavy bag with kicks in addition to class work will naturally condition the shins for that baseball bat impact just as well.

The shins of veteran nak muays are made of iron and feel little to no pain. Do you expect this kind of incredible resistance to come overnight? Learn to harden your shins the right way.

This amazing drill will help with timing, accuracy and balance on the posting leg – all the essentials for a stabbing teep. Head over to the teardrop bags in your gym after class (or any swinging hanging bag will do). Get into fighting stance and teep the bag with the lead foot so the bag swings backwards.

During this time, you have a brief second to reset back into fighting stance. As the bag starts to swing forward back towards you, use your rear leg to teep the bag when its momentum reaches its initial neutral position.

Continue this pattern with alternating teeps and never allow the bag to fully reach you. If the bag is spinning while swinging, then the teep was not accurate. Reset and teep until you get the straight back swing.

Working alternating teeps will help strengthen your posting leg for balance as well since you work on constantly pushing a swinging bag away. Visualize an opponent approaching every time you teep the oncoming bag to get the timing down.

This teep drill will teach you how to utilize that distance you project to keep probing punchers at bay.

The possibilities are endless when it comes to combos and feints, but here are some beginner-friendly setups to practice before innovating your own.

DOUBLE KICK TO FOOL YOUR OPPONENT

This is the most efficient combination that features a quick delivery, finish and recovery. The simple startup allows for a large margin of error and effective delivery for all Muay Thai fighters.

This basic combination is one of the most widely used combos seen in kickboxing and Muay Thai to date. The two initial shots keep the opponent preoccupied with the hands that the roundhouse will often slip through after.

Sean Fagan reveals his top 5 favorite combos. Mix in hand and foot strikes to keep your opponent on their toes. Kicks, punches, knees, elbows - it's all fair game!

Muay Thai fighters who exploit the teep to its fullest advantage keep the opponent guessing. Teeping the opponent several times writes for them a mental note to anticipate a kick straight down the center. Do it enough times and they often don’t expect a roundhouse kick coming over the top instead.

The switch roundhouse is a kick performed on the opposite leg. It is characterized by a quick shuffle that changes the stance and lead leg before the roundhouse launches. Opponents who react to this visual cue will bring the guard up high to prevent the roundhouse.

Before you can fake it, you have to learn to throw a switch kick for real! Let Nong-O teach you how he uses it to devastating effect in the Muay Thai ring.

KICKING FOR MUAY THAI… & YOU

Learning Muay Thai is similar to embarking on a hike to the peak of a never-ending mountain. Each basic technique picked up along the way will be used like a scaling tool. The teep and roundhouse need to be constantly sharpened before they dull out.

With enough practice, in time, you may end up finding yourself landing that perfect off-balancing teep or slamming home a roundhouse kick that puts your partner in check.

But first, take it slow, be consistent, and work hard to maximize everything the basics offer.

Daniel Nguyen is a packaging engineer who trains Muay Thai as a passionate hobby. With a smoker fight under his belt, his ultimate goal is to convince others to join in by conveying his passion for the sport and writing about his experiences.